Hallucinogens encompass a variety of drugs that cause hallucinations and alter the user’s perception.1 Since hallucinogens may cause detrimental health effects, such as side effects and overdose, it is strongly recommended that people who are struggling with hallucinogen use explore treatment options under the guidance of a qualified medical professional.

People have traditionally used them in religious rituals, but in recent times, users have been taking hallucinogens for recreational purposes. Many common hallucinogens are listed in Schedule 1 of the Controlled Substances Act, which means they have a high potential for abuse and are not accepted for medical use in the United States.1

According to the National Institute on Drug Abuse, in a 2012 research that looked at 36 nations, the United States had the highest percentage of high school students who used LSD or another hallucinogen.2 In the 2013 National Survey on Drug Use and Health, 229,000 Americans aged 12 or older said they had used LSD in the month before and 33,000 reported ongoing PCP use.2

What Are Hallucinogens Made Of?

If they are of natural origin, hallucinogens come from plants or fungi, while other hallucinogens are synthesized in labs illegally. Some naturally-occurring hallucinogens are psilocybin mushrooms, peyote, and Salvia divinorum. Ecstasy and LSD are examples of man-made hallucinogens. They come in many different forms, including tablets, impregnated paper, and powder.1

How Do Hallucinogens Work?

Hallucinogens cause their awareness-altering impact by affecting neural circuits in the brain that use the neurotransmitter serotonin. They have the largest impact on the prefrontal cortex, a structure located at the front of the brain which regulates cognitive processes, perception, and mood.3 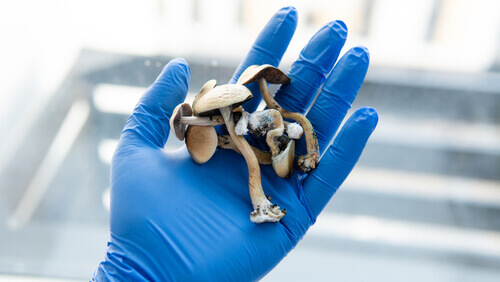 What Are the Different Types of Hallucinogens?

These are the common hallucinogen examples:1

Dissociative drugs are a group of drugs that falls under the broader category of hallucinogens. Some examples are:3

How Do Hallucinogens Affect the Nervous System?

A user will typically feel the impact of hallucinogens 20 to 90 minutes after taking them.4 Each user’s experience of hallucinogen intoxication, also called “a trip”, is individual. Hallucinogen effects may vary from intensely pleasant (“good trip”) to extremely unsettling (“bad trip”), depending on the dose taken as well as the user’s mood, character traits, and environment.4

Some of the sensations commonly associated with hallucinogen use are:

The duration of the effects of hallucinogen abuse will vary depending on the drug taken. For example, the effects of ketamine might last for 30 to 60 minutes while the impact of MDMA may last for 3 to 6 hours.1,5

What Do Hallucinogens Do to the Body?

What Are the Side Effects of Hallucinogens?

Hallucinogens are a versatile group of drugs, so there is a wide range of possible hallucinogen side effects on the body. These include short-term and long-term consequences.

Some of the short-term side effects of hallucinogens are:

All hallucinogens tend to impair the user’s ability to think clearly, which may lead to hazardous behavior and increases the risk of injury.1 They may also cause profoundly terrifying sensations, including paranoia, panic, and psychosis (bizarre thinking and behaviors).3

The long-term effects of hallucinogens include:3

The long-term effects of hallucinogens are more likely to happen if the user has a history of mental illness. However, any user can experience them, even if they only used the drug one time.3

What Is Hallucinogen Addiction Treatment?

Currently, more research into hallucinogen use is needed and the FDA hasn’t approved any medications for hallucinogen addiction treatment yet. However, behavioral treatment for addiction may be effective for people with a range of addictions, including individuals who require hallucinogen treatment.3 If a person is struggling with hallucinogen abuse, therapy could help them cope with the effects of their drug use and support them on their path to recovery.