In March 2017, a combined Yahoo! News and Marist Poll presented a series of reports on “Weed and the American family,” an in-depth look at the complexity of American views on the most popular drug in the world. The series highlights the extent to which marijuana has become more accepted, but there still remain significant risks regarding its abuse. Marijuana addiction is a real problem for many people, but treatment options are available. 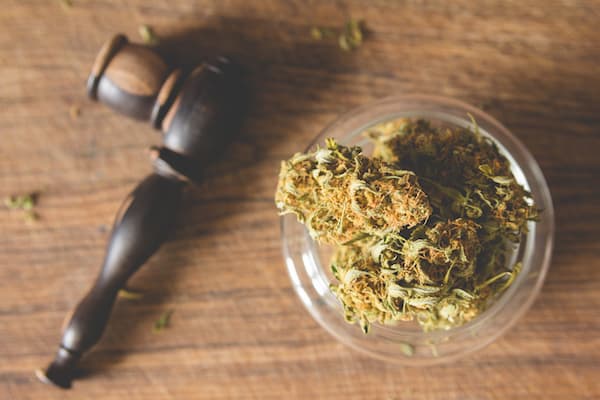 One of the reasons marijuana has such a significant effect on people is because there are more than 400 chemicals present in the drug. One of those chemical compounds is delta-9-tetrahydrocannabinol, or THC for short. THC is what affects the mental state of a person who smokes or consumes marijuana-based products and contributes to what makes marijuana addictive.

THC is the active chemical compound in marijuana. When it enters the bloodstream, THC binds to and activates the cannabinoid receptors in the brain. This has the effect of making the brain release dopamine, a chemical messenger that is responsible for inducing feelings of pleasure and reward, and creating a sense of anticipation for more pleasure and reward when the stimulating action is performed again. This mechanism applies to many normal behaviors; everything from having sex to being creative, from accomplishing a professional goal to simply listening to music releases dopamine and entices people to carry out that behavior again.

However, this also applies to drug intake, whether the drug is legal or illegal, and whether the intake is medicinal or recreational. When THC activates the cannabinoid receptors in the brain, the resulting dopamine creates a link between feelings of pleasure and reward, and the act of using marijuana.

While the dopamine produced as the result of normal behaviors is eventually reabsorbed by the brain, THC stimulates the brain to keep releasing dopamine, creating such a strong association between marijuana and pleasure that any other interest or recreational activity cannot (chemically) compete with.

Marijuana consumption feels good to many people, and its relative safety compared to other drugs (Scientific Reports ranked it the “least dangerous recreational drug,” in the words of the Huffington Post) has made it astoundingly popular. As many as 18.9 million people, or 7.3 percent of the American population aged 12 and over, used marijuana within the prior month of answering a survey put out by the Substance Abuse and Mental Health Services Administration (SAMHSA). A Pew Research poll conducted in October 2016 found that a majority of Americans support legalization and official regulation of marijuana, a drastic shift from as recently as 2006.

The widespread acceptance of marijuana into the mainstream has been greeted with caution by many in the healthcare industry. The director of SAMHSA noted that, despite the shifting tide, there are, and will be, legitimate cases of individuals, families, and communities dealing with the “devastating consequences” of easy access to mind-altering and addictive substances. The point is echoed by the American Psychological Association, which, in quoting the director of the National Institute on Drug Abuse, said that the growing tolerance of marijuana masks how uninformed people are about the drug – that, specifically, the general public is mostly unaware of how dangerous and addictive the substance can be.

Indeed, this ignorance (or selective acknowledgement) of marijuana’s properties makes it a very insidious drug, in the words of Mayo Clinic Proceedings. While more infamous drugs like cocaine and heroin have immediate and noticeable effects (including a high possibility of creating an instantaneous dependence), such a phenomenon does not exist with marijuana. There is only a small chance that a person taking their first hit of marijuana will become addicted. This creates the impression that the drug can be repeatedly consumed with safety.

Even though many teenagers believe that marijuana is a “safe drug,” a review of studies on the teenage brain have found that this perception is scientifically inaccurate. The developing teenage brain is particularly susceptible to the more addictive effects of cannabis as well as other long-term negative effects. While noting that only one in four teenage users of marijuana will go on to develop an addictive relationship with the substance, researchers nonetheless sounded the alarm that the scientific data makes clear: “Cannabis is not harmless to the adolescent brain,” especially to brains that are vulnerable to genetic, psychological, and/or environmental risk factors vis-a-vis mental health conditions and a likelihood of substance abuse.

To this point, “more and more college students are trying pot,” according to a study published by the University of Michigan. Freed from the supervisory eyes of parents and encouraged by peers, college campuses have long struggled with how to rein in potentially harmful behavior by those in their early 20s. Alcohol has always been the biggest source of concern, but because of marijuana legalization campaigns and shifting law enforcement priorities, “levels of first-time marijuana use among college students are at a 30-year high.”

The study author notes that people (both within and outside college campuses) look at marijuana like they do alcohol: as a recreational substance without notable and immediate harm.

But the concerns shared by APA, NIDA, and SAMHSA (among many other public health organizations) raise the question: How dangerous and addictive is marijuana? SAMHSA provided one answer in 2010, reporting that 9 percent of the people who smoke marijuana risk developing an addiction to it. The constant exposure to THC, combined with other factors (such as a genetic disposition toward substance abuse or mental health conditions, as well as environmental scenarios like stress and easy access to marijuana) could mean that those 9 percent of people develop an unhealthy psychological dependence on marijuana. Compulsive consumption of marijuana might fall in line with behaviors exhibited by people with some form of substance use disorder:

Nonetheless, “marijuana addiction is on the rise,” says Inverse, especially in places where there is majority acceptance of the drug. The JAMA Psychiatry journal found that in states where marijuana is either legal or less regulated by law enforcement, cases of cannabis use disorder spiked. A co-author of the study said that the increase in cases of drug abuse can be connected to “changing culture [surrounding marijuana] and a newfound ease of access.”

Problematic marijuana use also leaves physical evidence, such as a smoker’s eyes taking on a noticeably reddish tint due to dilation of capillaries in the pupils. Because of how THC increases sensitivity to the taste and smell of food, people who are high on marijuana will feel excessively hungry (the infamous munchies). Researchers at the University of Montreal found that regular marijuana smokers experienced weight gain at a rate congruent with their consumption of marijuana. A professor at the university commented that “long-term cannabis use indeed influences weight gain.”

As a relaxant, marijuana induces feelings of lethargy; this is pleasant in the short-term and contributes to the stereotype of marijuana users being lazy, but long-term use of the drug does affect ambition and motivation due to what the constant THC exposure does to the brain’s dopamine levels. This is more likely the case in people who started smoking marijuana at a younger age. Research has suggested that exposure to THC while the brain is still developing can cause cognitive and memory problems later in life, which may also impair motivation and ambition, a form of “amotivational syndrome.”

In explaining “What happens if you smoke marijuana every day,” a former president of the American Society of Addiction Medicine explains to USA Today that chronic pot use leads to THC not simply going to the brain, but also being released into the bloodstream. The result of this is that someone who smokes for hours on a daily basis “can experience the effect of the drug around the clock.” At first, this may feel good, but the cognitive effects of persistent THC will be multiplied. The inability to concentrate and retain memories never goes away, and academic and professional performance is impaired to the point of serious disruption. Even a doctor at Johns Hopkins Medicine who argues against generalizing all marijuana users admits that improper use can harm important day-to-day functioning.

The clearest sign and effect of a drug addiction to marijuana is an inability to stop using the drug because the body rejects the attempt (sometimes violently). These withdrawal symptoms develop if a user’s brain has gotten so used to the presence of THC that it cannot cope without the continuous stimulation of the cannabinoid receptors. If a user is unable to go for any period of time without marijuana without experiencing these symptoms, then the level of the marijuana consumption could be said to be addictive.

Marijuana withdrawal symptoms include, but are not limited to:

Notwithstanding the severity of a marijuana problem, addiction to marijuana is rarely a life-threatening problem. For this reason, most of the people who compulsively smoke marijuana can be treated on an outpatient basis; that is, hospitalization or residential treatment will probably not be necessary unless the marijuana abuse is a piece of a larger picture.

Marijuana addiction treatment begins with the user cutting down on their marijuana intake at a pace decided upon by a doctor. The decision of how slowly to wean off smoking depends on the user’s rate of consumption, as well as if there are other medical or mental health issues that need to be considered. Whatever those issues are, the process of scaling back from unhealthy marijuana use is likely to cause withdrawal symptoms; in some instances, clients are given some form of medication (anti-anxiety drugs, for example) to ease the process. Clients would be required to check in regularly with doctors at the treatment center to ensure that there are no adverse reactions to the anti-anxiety medication, that the withdrawal process is on schedule, and that there has been no relapse back to marijuana.

How long this process takes depends on the client’s unique factors; the severity of their marijuana abuse; if any other drugs are involved; family medical and mental health history; and individual psychological status.

Pay For the Treatment

With marijuana treatment, clients often attend one-on-one sessions with a therapist, participate in group therapy with other recovering individuals, and engage in family therapy and complementary therapies (as applicable). Therapists tend to use behavioral treatments, like Cognitive Behavioral Therapy and/or Motivational Enhancement Therapy, to change the negative thought patterns that compelled the harmful marijuana use and replace them with healthier ways of thinking and processing complicated situations and feelings beyond reaching for a joint to get high as a way of forgetting the problem or stress at hand. The Addictive Behaviors journal notes that a form of Cognitive Behavioral Therapy, known as Integrated Cognitive Behavioral Therapy, shows great potential in treating those psychologically dependent on marijuana who also struggle with clinical anxiety and may have been compelled to engage in high levels of marijuana abuse as a way of self-medicating their anxiety attacks.

The final component of marijuana addiction treatment is connecting with an aftercare support group. Having a network of other people who also overcame their marijuana dependence allows a person to stay in touch with the philosophies of treatment and also to find immediate help when the temptation to relapse becomes strong. Being in a position to offer advice and support to new members of the support group can also act as incentive and motivation to stay sober.

Our Rehab Centers by State
No sources available.