The group was founded in 1989 when delegates from three marijuana recovery groups from California (L.A. County, San Francisco Bay, and Orange County) decided to unite. Later on, MA was joined by members of Marijuana Anonymous NYC and Marijuana Anonymous Seattle, as well as members from other states.2

Today, Marijuana Anonymous is one of the most widespread marijuana recovery groups in the US. It also operates abroad, in countries such as Canada, New Zealand, Denmark, and the United Kingdom. Since its inception, Marijuana Anonymous has significantly grown from an organization with several hundred members to a group whose program was followed by thousands.2 3 4 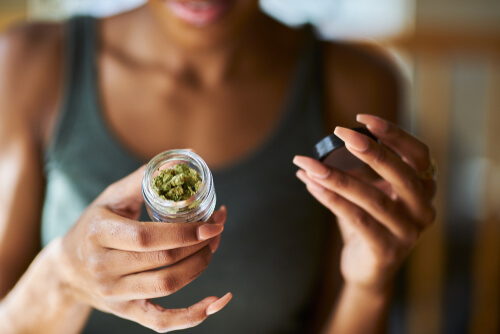 The 12 Steps of the Marijuana Anonymous Program

Marijuana Anonymous meetings are based on the principles of the group’s 12-step recovery program. The goal of this program is to offer a clear path and hope for people who use marijuana and join Marijuana Anonymous to overcome their habits. These are the steps that MA members go through chronologically:5

One of the advantages of this program is its simplicity. Yet, devoting oneself to the program requires a significant amount of readiness to follow through with the steps. The goal of the program is not to reach perfection, but rather to improve oneself. Any sort of progress during the program is a tremendous success.5

The main message of the program is that only the search for a Higher Power could help people struggling with marijuana addiction. The whole concept was developed in the book Life with Hope, which is one of the hallmarks of Marijuana Anonymous.5

What Can Someone Get From Joining Marijuana Anonymous?

By joining Marijuana Anonymous meetings, one can open herself to an opportunity to recover from addiction. These marijuana support groups are organized to help treatment-seeking individuals share their stories and hear advice from people who have similar problems.7

Each newcomer is paired with a sponsor. The role of the sponsor, who is a person recovering from marijuana addiction themselves, is to offer assistance to their sponsee. Their aim is to walk the sponsee through the 12 steps of Marijuana Anonymous, at the same time discussing the issues the sponsee might have on their journey.1 6 Another upside of Marijuana Anonymous meetings is the complete anonymity provided to the attendees.7

The benefits of programs similar to Marijuana Anonymous are well-documented in the scientific literature. A study of 142 attendees of Alcoholics and Narcotics Anonymous programs found that people who used alcohol and drugs were much more likely to abstain from these substances 5 years after the sessions compared to their pre-treatment habits. Similar results are expected to take place following the attendance at any of the Marijuana Anonymous meetings or programs.8

All Marijuana Anonymous meetings share the same goal: members help each other recover from marijuana addiction. Yet, meetings may have different formats. Some of the sessions consist of a lecture provided by a speaker. Others involve participants going through Marijuana Anonymous readings, including the Life with Hope book. Some meetings consist of practical exercises aimed at accelerating the recovery.7

The typical meetings, however, consist of participants sharing their personal stories and trying to identify with each other. They speak about the reasons for their addiction and the steps they have taken so far to overcome it. Those participants who had some success on their path speak about the way life feels like in the new circumstances. These honest conversations usually involve a lot of openness and vulnerability, both of which are essential for improvement.7

Attendees of these marijuana support groups are able to speak about themselves as much as they wish. There is no pressure to disclose more than one is willing to. Participants can rest assured that nothing they did or said during the sessions would be revealed to a non-member.7

How Much Does It Cost to Attend Marijuana Anonymous Meetings?

Unlike treatments that are either covered by insurance or require people to pay for them directly, Marijuana Anonymous makes it clear that membership in their marijuana support groups is completely free of charge. Any contributions to the organization are completely voluntary. During the meetings, participants pass the basket to each other so that anyone willing can put their contribution inside. So far, this method has proven to be effective in providing help to people who struggle with marijuana addiction and have no money.7

How to Get Ready for My First Marijuana Anonymous Session?

There is nothing more important than an appropriate mindset when it comes to the preparation for one’s first Marijuana Anonymous meetings. This mindset primarily consists of a belief that the problem could be solved. The participation of people who have had success with their recovery serves to confirm further the belief that, with the right steps taken, a change could follow.7

The belief in change and the possibility of recovering from marijuana addiction is associated with the willingness to overcome one’s issues. The awareness of personal addiction problems and the possible solutions to them is a precondition for one’s fruitful participation in Marijuana Anonymous meetings.7

Besides the right mindset, the person willing to join the sessions should check when the meetings will be held in their proximity and adjust other daily plans accordingly. Many people first call a marijuana addiction treatment hotline to find out more about the recovery process.7

Who Are Marijuana Anonymous Meetings Meant for?

Marijuana Anonymous meetings are primarily aimed at people who are willing to overcome their addictive behaviors. The frequent use of marijuana has made many of these people less functional in their daily lives.9

Studies show that the short-term effects of marijuana use involve mood changes, impaired cognitive abilities, and body movement issues. In the long term, the frequent consumption of marijuana smoke could lead to more severe problems, including a non-negligible decrease in IQ points. In addition to these, prolonged exposure to marijuana smoke could lead to physical symptoms such as an increased heart rate.9 What further complicates the issue is that it might take as long as three months for marijuana to leave each part of one’s body.10

During their path to recovery, many Marijuana Anonymous members might experience disturbances that are unrelated to their main problem. This is why it is important to develop functional coping mechanisms so that people can focus on their recovery. Some of these coping mechanisms might include acceptance of the emotions as they arise (which is consistent with the 12 steps of Marijuana Anonymous recovery program).5

How Long Do Marijuana Anonymous Meetings and Its Program Last?

The duration of both the individual meetings and the 12-step Marijuana Anonymous program may vary. How long particular sessions will last usually depends on the type of the session, as well as the agreement between participants. The duration of a typical discussion meeting will be longer if it involves a break than if it does not. As for the speaker, topic, and online meetings, their duration would typically depend on the organizers.11

There is no predefined duration of the full Marijuana Anonymous recovery program either. The pace at which a participant will complete the program is largely up to her personal sensibilities. Despite the fact that people who take part in Narcotics and Alcoholics Anonymous programs are regularly invited to attend 90 meetings in 90 days, a lot of flexibility is provided for those who need more time. The fact that Marijuana Anonymous organizers have not issued such invitations suggests that even more flexibility is being granted to people attending their marijuana support groups.13

What Are the Alternatives to Marijuana Anonymous Meetings?

There are many options for people who are, for some reason, skeptical about Marijuana Anonymous meetings. After they complete a medically supervised detox program, which may last as short as 3, 7, or 10 days at their rehab facility of choice, they will be referred to a rehab program to continue their recovery. Rehab typically involves multiple therapy sessions per day and usually involves a medication regimen.14

Some people receive treatment for marijuana addiction at weekend rehab centers. This alternative is much more flexible compared to its more intensive counterparts. It involves people coming to the facility on weekends, mostly to take part in certain therapy sessions. Usually, this sort of treatment lasts for 9 hours per week and needs to be done on a continuing basis in order to be effective.15

There are also longer programs designed to offer a more comprehensive treatment. The shortest of these are the 28 and 30-day drug rehab programs, mostly tailored to people with moderate substance disorders. These programs consist of carefully planned daily schedules which involve various kinds of counseling and therapy sessions, as well as daily meals and aftercare, to ensure that one stays on the right course.15, 16

Many people would need to follow additional treatment on an outpatient basis. Those with more severe addiction issues would, however, need to undergo longer treatment, such as a 60 programor 90-day treatment options for drug addiction. Involving a much similar regimen to the one in 28 and 30-day programs, as well as medication, these long-term programs have been proved to be much more effective, particularly in ensuring adherence to the treatment.15,16

Besides these, there are various options that could be specifically designed for one’s personal circumstances and preferences. For example, some programs are more suitable for couples, while others are more focused on an increasingly prevalent issue of teen drug addiction.17 18 Whether a person would opt for one of the various residential short-term programs or rather for any of the long-term programs that treat addiction depends on their unique set of problems.16

Where to Find Marijuana Anonymous Meetings Near Me?

Marijuana Anonymous meetings are usually organized in various places so people from all over the US (and even abroad) could attend them. Some key places where Marijuana Anonymous meetings are organized nationwide include large US cities such as NYC, Los Angeles, Las Vegas, Dallas, and San Diego. Marijuana support groups are also frequently organized in places outside the US, such as all across Europe.19Anyone interested in attending some of the upcoming support groups is advised to visit the organization’s search tool available on the organization’s website.19 The tool offers the opportunity for an advanced search for available dates, based on location or type of meeting. One can also check to see whether a meeting could be attended online. This feature is particularly useful for those who do not live in big cities or are, for some reason, prevented from attending in person.7