Post-traumatic stress disorder (PTSD) and substance abuse interact in complex ways. As an intense anxiety disorder, PTSD deeply affects a person’s sense of wellbeing. In order to cope with the feeling of unsafety and disturbance, many people with PTSD attempt to self-medicate with drugs or alcohol to alleviate their condition.1

The causal relation sometimes also works in the opposite direction: people who struggle with addiction are more exposed to risky situations in which they may experience or witness a traumatic event, after which they can develop PTSD.1

In order to help the person who is struggling with these issues, PTSD and substance abuse treatment often needs to take these relations into consideration and address them jointly.2

Post-traumatic stress disorder (PTSD) is a mental health condition that develops after a person experiences or witnesses a life-threatening or traumatic event. Such events are natural disasters, terrorist attacks, wars, serious accidents, or assaults.3

PTSD does not necessarily develop immediately after these experiences. For the first few days or weeks after such an intense event, it is normal to have insomnia, nightmares, or feel anxious. However, if these symptoms persist for months after the event, if they get worse, or if they have a delayed start, this indicates that a person is suffering from PTSD.

The signs of PTSD are the following:3

Additional symptoms and behavioral consequences may include:

To be diagnosed with PTSD, a person must meet the following criteria, as laid out in the DSM-5:4 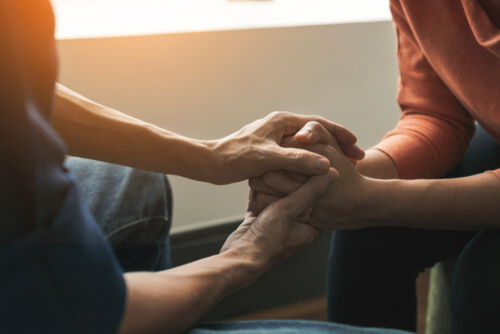 How Common Is PTSD?

Not everyone develops PTSD after a traumatic incident. Science still does not have a clear answer as to which factors and to what extent determine whether a person will develop PTSD. Like with other mental health and substance use disorders, it is probably a combination of genetics, environment, and experiences. Neuroscience has found that some people’s nervous systems could be more likely to develop PTSD if exposed to life-threatening danger. Nevertheless, it is important to note that PTSD is not a sign of weakness—it can happen to anyone.

The National Center for PTSD reports that at least 7 or 8% of people will experience PTSD at some point in their life.5 This applies to people of any age, gender, personal history, or job history. However, data suggests that some groups of people are at greater risk of developing co-occurring disorders than others, such as women and war veterans, or first responders who may struggle with PTSD and addiction. The Anxiety and Depression Association of America (ADAA) notes that 7.7 million Americans older than 18 have PTSD, as do 67% of people who have been exposed to mass violence.6

How Are PTSD and Substance Abuse Related?

Mental health conditions can be closely associated with substance abuse. In order to cope with the unpleasant symptoms of PTSD, people might use alcohol, prescription drugs, or illicit drugs.

In some cases, this can lead to addiction. The American Society of Addiction Medicine (ASAM) defines substance abuse and addiction as a primary, chronic disease that changes the reward center of the brain.7 Drugs and alcohol change how neurotransmitters are released and absorbed by neurons, which increases a person’s sense of pleasure, relaxation or stimulation, and wellbeing. When the reward center gets triggered by dopamine, serotonin, and other neurotransmitters, the individual is likely to perceive the euphoria induced by drugs and alcohol as positive.

After compulsively consuming drugs to achieve a certain balance of neurotransmitters, the individual is likely to develop:8

When PTSD and substance abuse occur together, they are referred to as co-occurring disorders. The statistics of the VA shows that 2 out of 10 veterans in the United States have both PTSD and a substance use disorder (SUD).9 Veterans who abuse alcohol are more likely to binge drink when symptoms intensify than drink heavily but consistently. Veterans who have received a PTSD diagnosis smoke cigarettes at twice the rate of those who do not have PTSD – 6 out of 10 compared to 3 out of 10, respectively. Inpatient substance abuse treatment programs have reported that half their clients meet the criteria for PTSD alongside their SUD when they enter treatment.1

Which Substances Are Abused by People With PTSD?

A study that explored the prevalence rates of certain substances among people struggling with PTSD found that certain drugs were more present than others:10

Another survey examined how many people with substance abuse issues also had PTSD found that a range of 23 to 42% of those currently struggling with cocaine addiction also had a lifetime PTSD diagnosis.11

Why Is PTSD and Substance Abuse Treatment Important?

Even if they do not develop substance abuse problems, people who struggle with untreated PTSD for a long time may develop other health issues that result from consistent stress. Some of these conditions include:9

Substance abuse has direct measurable impacts on the body. Although health effects depend on the type of substance, most long-term substance abuse that goes untreated typically harms multiple body systems. Some of these include an increased risk of the following conditions:12

Dealing with substance abuse and mental health issues individually is difficult as it is. When the two co-occur, the path to recovery can become even more arduous. By seeking out treatment for co-occurring substance abuse and PTSD, you can maximize your chances of attaining a fulfilling, healthy lifestyle.