Prescription drug misuse can occur when a person uses medication in ways that have not been prescribed by a doctor, which may escalate into addiction.1 Since prescription drug abuse is a serious epidemic, harming the lives of millions of people across the United States, lawmakers and medical professionals are working hard to combat it.2 They aim to change approaches to prescribing practices, increase access to care and treatment for pill addiction, and understand the underlying causes.

These are the most common circumstances when prescription drugs are abused:1

Any of these problems can lead to addiction to prescription medication. People who are struggling with this kind of substance abuse disorder are advised to seek treatment for prescription drug abuse. 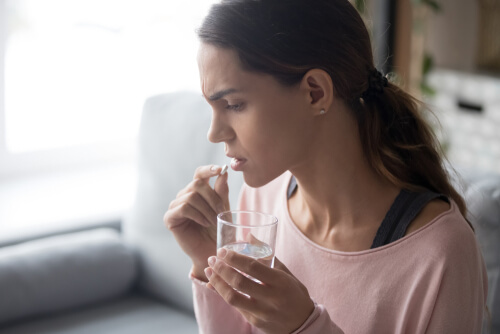 The Epidemic of Prescription Drug Addiction

The Monitoring the Future (MTF) Survey, which gathers data about substance abuse among middle and high school students, found that 10% of 12th graders abused narcotics besides heroin at least once in their lifetime; 17% abused amphetamines like Ritalin; 10% abused barbiturates, and 11% abused other tranquilizers.4

There are a number of various reasons why people abuse prescription drugs. Factors like genetics, environment, and family history intersect in ways that may increase an individual’s risk for developing substance abuse or addiction problems. Many potent drugs, including those prescribed to treat specific conditions, can trigger the release of neurotransmitters like dopamine and serotonin. This is a benefit in some ways because the person will feel better while they take their medication. However, if a drug quickly changes how these neurotransmitters are released and absorbed, then the brain’s reward system can be stimulated very quickly, creating a sense of euphoria, or a high.6

Some people assume that prescription drugs are safer than illicit drugs, but they can be just as addictive. Opioids, central nervous system depressants, stimulants, and steroids all affect the brain and body in different ways and can lead to substance abuse.6

Taking painkillers for a longer period of time, needing larger doses to achieve the same effect, experiencing withdrawal symptoms, and continuing the use despite the negative consequences are signs of addiction.6 In such situations, the person is advised to speak to a medical professional about appropriate pain pill addiction treatment.

What Are the Most Addictive Prescription Drugs?

The three classes of prescription drugs that are most commonly abused are opioids, depressants, and stimulants.

Prescription painkillers are the most abused type of prescription drug. With efforts to control the over-prescribing and abuse of opioid painkillers, there are now tighter regulations and greater monitoring of prescriptions for opioids. This has caused many people struggling with prescription drug addiction to turn to heroin, which is less expensive and often easier to acquire in the US. Drugs in the category of opioid analgesics include:8

Side effects from opioid abuse include sleepiness, constipation, slowed breathing, low heartbeat and blood pressure, and harm to organ systems from oxygen deprivation. Since these effects can be quite harmful, pain pill addiction treatment is often needed.9

Withdrawal from opioids can be uncomfortable, ranging from mild to severe, so it is important to get medical supervision. Withdrawal symptoms most often feel like the flu and include muscle and bone pain, diarrhea, vomiting, insomnia, and cold sweats.9 However, the psychological symptoms, including cravings, depression, anxiety, and insomnia, are more likely to lead a person to relapse if they are not working with a doctor to safely detox during a structured treatment for opioid addiction.

In addition to developing tolerance and experiencing withdrawal, there is also a risk of overdose. The main symptom of opioid overdose is irregular, shallow, or depressed breathing. The person could fall into a coma and die from oxygen deprivation without emergency medical assistance. The CDC reported that, since 2015, there are 91 people in the US who die every day from opioid overdoses. However, there was a reduction of 4% in opioid-caused overdose from 2017 to 2018.10

Central nervous system depressants are substances that slow brain activity. These include tranquilizers, sedatives, and hypnotics. The most commonly prescribed medications from this category are the following:9

This class of medications is prescribed for short-term treatment of anxiety and panic disorders. Benzodiazepines are sometimes prescribed to treat epilepsy or other seizure disorders, and they can be prescribed off-label to treat alcohol withdrawal. The body quickly develops a tolerance to these medications, which act on the GABA receptors, much like alcohol.

Withdrawal symptoms from benzodiazepines feel a lot like the psychiatric symptoms they were prescribed to treat, including anxiety, panic attacks, and seizures. Because of this, ending the abuse of these medications can be challenging without medical supervision.

The most popular forms of benzodiazepines currently are Xanax, Klonopin, and Valium. They are the most widely prescribed forms and end up diverted for illicit sale most often. Although benzodiazepines can by themselves be abused, they are more often mixed with other CNS depressants, especially alcohol or opioids. Benzodiazepines mix with these substances and increase their potency.11

Sedative-hypnotics like Ambien, Lunesta, and Halcion were developed as nonbenzodiazepine medications to treat insomnia. They are intended for short-term use, but unfortunately, like benzodiazepines, they often become part of a pattern of polydrug abuse. These drugs are most likely mixed with alcohol, either by accident or to get high. This can result in overdose, but it also likely results in dangerous parasomnias, like walking, eating, having sex, and driving while asleep.13

Withdrawal from these drugs can have similar symptoms to those associated with withdrawal from benzodiazepines and opioids. Cravings are the most common side effect, but rebound insomnia, anxiety, or fatigue are common. A medically supervised treatment for prescription drug abuse would be necessary to safely detox.

Drugs in the category of stimulants are typically amphetamines, which is a potent stimulant drug that helps people who need it stay awake, concentrate on tasks, and regulate their neurotransmitter activity in order to feel better. Attention deficit hyperactive disorder (ADHD), narcolepsy, and rare forms of depression are conditions that benefit from closely monitored prescriptions of stimulant drugs like Adderall and Ritalin.

People abuse stimulants to feel exhilarated, energetic, and happy. However, too much dopamine can also make the person hallucinate, feel paranoid, become delusional, or suffer physical harm from high heart rate and blood pressure. Adolescents and young adults are most at risk for abusing prescription stimulants because they are mistakenly believed to enhance school performance. Some young adults also take prescription stimulants as a form of diet pill because they suppress appetite and increase energy.14

Harmful side effects from prescription stimulants include:15

Ending an addiction to these drugs is tough without professional treatment for pill addiction. Withdrawing from stimulants leads to intense cravings for the drugs, chronic depression, insomnia, and anxiety. However, it is important to end stimulant addiction because of the potential physical damage to the heart, liver, kidneys, and lungs, which may require years of medical treatment.

These drugs are not prescription medications, but they can be abused. People who abuse steroids typically have a psychiatric condition like an eating disorder or body dysmorphic disorder. Anabolic steroids are abused in three ways:16

Steroid abuse does not release dopamine through the same control over neurotransmitters as other prescription drugs. However, it can change brain chemistry and structure over time. Steroid abuse may result in mental and emotional changes, including paranoia, delusions, aggression and irritability, and impaired judgment. Physical side effects from long-term abuse include kidney failure, liver damage, chronic high blood pressure, cholesterol changes, and an enlarged heart.

As with other types of addiction, treatment for prescription drug abuse also consists of safe, medically supervised detox followed by participation in a rehabilitation program for at least 90 days.17

Some kinds of withdrawal, such as opioid detox as a part of pain pill addiction treatment, can be managed using medication-assisted therapy. This usually involves buprenorphine but may sometimes involve methadone. The new prescription replaces opioid abuse, and the doctor can slowly help their patient taper buprenorphine use over time until their body is no longer dependent on opioids.

Other drugs, like stimulants, do not have a similar kind of replacement therapy. However, working with a medical professional during treatment for prescription drug addiction means access to other drugs, like anti-nausea medicines or anti-seizure drugs. This can reduce risks associated with withdrawal. Those who are dependent on benzodiazepines may be put on a tapering schedule where the dose of a long-acting benzo is slowly lowered over time as the person is weaned off the drug.

What is the Role of Rehabilitation Counseling?

In addition to detoxification, people who are struggling with addiction need counseling as a part of the pain pill addiction treatment. Cognitive behavioral therapy, used both during individual and group sessions, helps users understand their emotional responses to stress, triggers, or pain that drive their behavior toward seeking drugs. With a better understanding of themselves, people can change their behaviors to bring about more positive outcomes.

Therapy can also help to diagnose and treat underlying mental health conditions, like depression, anxiety, bipolar disorder, and schizophrenia. There are various forms of counseling: individual and group sessions, family therapy, and so on, which can take place in inpatient or outpatient settings.

How our treatment is different?
▶