Methadone is a synthetic opioid medication used for two purposes: drug addiction treatment and pain management. However, methadone itself can be addictive and if not used exactly as prescribed by a doctor, it can have dangerous health effects.1

The Introduction of Methadone

Methadone was originally developed in the 1930s as an opioid analgesic, intended to be less addictive than heroin or morphine. As heroin addiction spread across the U.S., methadone treatment became an important element of overcoming illicit drug addiction.

Methadone was introduced to the U.S. as a prescription painkiller somewhat later, but the use of methadone to manage pain began increasing in the 1990s.2 Since then, methadone has become responsible for overdoses caused by prescription drugs. For example, in 2009, of the total number of prescription drug overdoses, over 30% were attributed to methadone. Until 2014, the rate of methadone overdose deaths was increasing. Research data suggest that the rise in methadone overdose deaths was due to its use for pain management, not its use to mitigate symptoms of heroin or opioid withdrawal.3

These alarming figures made it clear that it was necessary to pay more attention to how methadone is prescribed in order to avoid accidental overdose deaths. Since in some cases methadone became habit forming, in addition to the originally intended addiction treatment with methadone, it has become necessary to provide treatment for methadone. 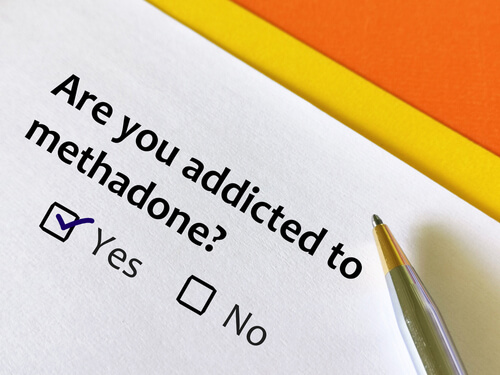 How Is Methadone Used?

Methadone can be obtained in the following forms:

In the U.S. it is sold under two brand names: Methadose and Dolophine.

When methadone drug treatment is used for opiate addiction, the drug is given only to people who have struggled with high-dose opiate addiction that has lasted a long time. Methadone’s potency helps reduce or prevent withdrawal symptoms. However, the person must have a high tolerance to opioids, otherwise, they will experience an intense and potentially addictive euphoria.

As a prescription painkiller, methadone has become popular because it can reduce pain for a full day or sometimes up to 36 hours.1 For people with chronic pain, the duration of methadone’s effects is a huge benefit. Using methadone as a painkiller makes it possible to:

Medicaid patients are the primary recipients of this drug since it is inexpensive. In 33 states in the U.S., methadone is listed as a preferred medication for Medicaid patients.4

How Is Methadone Abused?

Since methadone has re-emerged as a prescription painkiller, it is more available in people’s homes, which means it can be abused for nonmedical reasons. Research conducted by the Substance Abuse and Mental Health Service Administration estimated that as many as 23.5% of past-year users of methadone misused this drug.5 Moreover, methadone is sometimes sold or traded for other drugs, as well as acquired through fraudulent prescriptions or theft.6

For people who do not have a high tolerance to narcotics, the high from methadone can be intense and addictive. While methadone may be an effective addiction treatment when use is closely monitored and the drug is taken as prescribed, inappropriate use can be responsible for overdose death.7

With prolonged use, people can become dependent on methadone. Furthermore, some might develop tolerance as with any opioid, which means that they may need a larger dose for the same effect and experience withdrawal symptoms when stopping taking methadone suddenly.8 In these cases, a person is advised to consider entering a methadone treatment program.

What Are the Signs of Methadone Abuse?

If a person is abusing methadone recreationally, they may display symptoms similar to those of people who struggle with heroin use, OxyContin, or other opiates. However, the symptoms may last longer, as methadone stays in the body for several hours. Symptoms include:

These signs indicate that a person needs to undergo methadone addiction treatment so that some even more serious issues, including overdose, can be prevented.

How Does Methadone Overdose Happen?

There are two high-risk scenarios for methadone overdose:

Warnings on methadone prescriptions tell those who have these medications that they should not consume other intoxicating substances with methadone, but people who struggle with opioid addiction, dependence, and tolerance are less likely to follow those instructions.8

What Is Methadone Treatment & How Does It Work?

Methadone addiction treatment will likely involve a taper.9 Since methadone is still used as maintenance therapy for other opioid detox processes, a physician may work with their patient to taper how much methadone they take rather than trying to replace the drug.However, a physician may also prescribe buprenorphine to taper their patient’s methadone dependence. The doctor may use the Clinical Opioid Withdrawal Scale (COWS) to determine how severe their patient’s withdrawal symptoms are, which helps them determine how to adjust the length of time they will slowly taper their patient off methadone.10