According to available research, the number of people who identified as American Indians or Alaska Natives (AI/AN) in the US was 5.7 million people in 2019, or about 1.7% of total population. The 2010 US Census shows that only 22% of AI/AN lived on reservations or trust lands with as much as 60% living in a urban metropolitan areas.1

Alcoholism is prevalent among Native Americans to such an extent that 48% of 18-25 year olds and almost 45% of people aged 26 years and older reported drinking in the past month in 2017. When it comes to alcohol use disorder (AUD) those numbers were 11.2% and almost 10% respectively. In the same year, there were approximately 6.5% of those who suffered from opioid misuse in both of these age groups.3 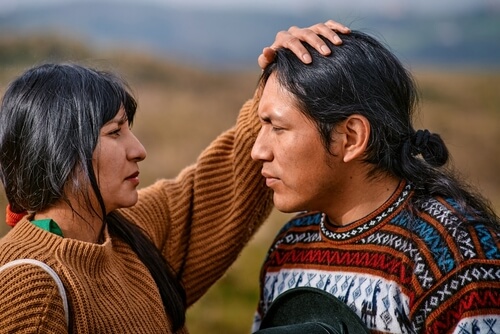 What Are the Causes of Alcohol and Drug Addiction in Native Americans?

At first, alcoholism among Native Americans was to a great degree culturally influenced by the prevalent consumption patterns to which they were exposed at a time when alcohol was introduced into their communities by White American frontiersmen. The introduction of drinking and later drug use was at first used as an instrument of oppression and subjugation.4

Addiction among Native Americans is today primarily driven by economic and social factors such as:3

American Indians and Alaska Natives also suffer from a greater prevalence of violent victimizations than all other groups. There were 124 violent assaults on every 1,000 AI/AN citizens which is 2.5 times more than the national average of 50. Simple and aggravated assaults were the 2 most common types of violent victimizations that members of Native American communities had to suffer.5

What Are the Effects of Drug Addiction on Native Americans?

Unfortunately, mortality rates among AI/AN are higher than for the rest of the US population in almost all categories. It’s shocking that suicide represented the second main cause of death among American Indian/Alaska Natives in the age group of 10 to 34 year olds in 2019. AI/AN exhibited 20% higher death rates resulting from suicide than non-Hispanic white population.6

The number of deaths from overdose involving opioids consumption was about 9.4 out of 100,000 people in 2010, with a tendency of steady rise over the years before almost doubling in the 10 year period to 17.7 in 2019. Those numbers then spiked significantly to a new high of 27.4 during the COVID-19 pandemic in 2020.7

Death rates caused by alcoholism are 520% higher for Native Americans than for the general population. This means that death caused by an excessive use of alcohol causes 5 times more deaths among AI/AN than for other Americans.4

What Are the Barriers to Addiction Treatment for Native Americans?

One of the problems Native Americans have is the low level of acceptability of mental health services when they are available. This can be explained by the low level of trust they have in the government and modern society as such. American Indians and Alaska Natives are also faced with barriers when it comes to treatment funding and availability of healthcare services, including:4

Major factors that influence engagement and participation in available healthcare services include:4

Language is also an issue. In 2020, only 87 rehab centers nationwide out of existing 16,066 treatment facilities in the country, or about 0.5%, had staff counselors who were fluent in one of the Native American languages. This number rose to 2% for rehab centers that had staff counselors who provide treatment services in languages other than English.8

Indian Health Service (IHS) operated 29 treatment facilities in 2020, which means that the number of rehab centers which treat Native Americans suffered a huge reduction of 40% from the 50 that were in operation in 2012. None of these 29 facilities offer partial hospitalization or hospital inpatient recovery programs, which is a very serious drawback when it comes to high-quality addiction recovery.8

It’s important to understand that awareness is also an issue that needs to be addressed since members of American Indian and Alaska Native communities live in close-knit communities and don’t enjoy the same level of exposure to certain topics and conversations as their peers.2

How Are Drugs Abused by Native American Youth?

Since AI/AN youth usually live in tight knit communities with pronounced tribal and filial customs, family risk factors play a big role in potential substance abuse. Parental and other family members’ substance use leads to an increased probability that the offspring will engage in similar activities and behavioral patterns.9

Some of the possible explanations for the connection between familial substance abuse and addiction in American Indian and Alaska Native youth are:9

What to Expect in Native American Rehab?

One of the most important principles of successful recovery is the need to enter into treatment as soon as you feel you might be ready. There is a widespread consensus that the best way to approach and treat SUDs is through a combination of proven rehab techniques and their specific healing practices. Keep this in mind when you’re choosing between different forms of treatment.4

Even though AI/AN have their unique rituals and ceremonies that are part of traditional native healing, they still tend to differ significantly among tribes. Because of this, certain patients might feel uncomfortable with customs and practices of other tribes. Religious background can also play a strong role in influencing individual’s rejection of certain rituals and ceremonies they perceive as unacceptable or “supernatural”.4

You can contact rehab centers and ask their admissions staff about the availability of these services, but there are certain traditional Native American healing practices that are culturally acceptable to more than one tribe, such as:4

Most Native American addiction rehab and recovery programs introduce these elements in combination with mainstream treatment approaches like support groups, 12-step programs, counseling therapies and medication assisted treatments to engage members of AI/AN communities in delivering a whole person recovery that is seen as a holistic process that doesn’t separate mental from physical well-being.4

Each treatment center has its own rules and regulations concerning dress codes and items that are accepted inside the facility, so it might be best to give them a call before embarking on a trip. If you end up bringing items that are considered inappropriate and forbidden, don’t worry rehab center staff will take them away during the intake assessment procedure and return them when you are ready to leave.3

In many ways addiction rehab packing lists for Native Americans won’t differ from other ethnicities and will include all those things that are needed to make a prolonged stay inside a treatment center more comfortable. These are some of the items that you will probably be allowed to bring to most rehab centers in the US:3

How Can Native Americans Pay for Rehab?

Indian Health Services is a federal program that is a part of the U.S. Department of Health and Human Services and provides healthcare coverage to Native Americans and Alaska Natives. If a person is eligible for IHS coverage, he/she is also eligible for Medicare which can be useful when IHS coverage doesn’t provide enough services to meet their individual needs.10

Beside programs that are funded through IHS there are also numerous state-funded addiction treatment programs which deal with SUD and other mental health issues. They are usually reserved for those who suffer from budgetary constraints or have low or no income making them unable to fund their addiction rehab. If you don’t have insurance or have financial issues that prevent you from acquiring it, you can look into:10

How to Find Treatment Centers for Native Americans Near Me?

Government has a few websites that give people the option of finding treatment easily and quickly on websites like FindTreatment and National Helpline which is run by SAMHSA. There is also a SAMHSA facility locator which helps people find rehab centers in their area according to certain characteristics like types of treatment and available amenities.

American Addiction Centers is a nationwide leader in the field of substance abuse treatment with rehab centers in various locations around the US. AAC specializes in individual care that has helped many struggling individuals overcome their issues.

You can give them a call and find out more about the admissions process. AAC’s team will help you get to grips with your insurance benefits and run you through the process of insurance verification. AAC’ treatment centers offer a wide range of programs to choose from, including:

Recovery approaches that cater to senior citizens and their unique everyday rhythm.