Drug Rehab For Women – Find Women’s Rehab Programs Near You

Women are about half as likely as men to abuse and suffer from dependence on illicit drugs or alcohol. Reports say that around 7% of women suffer from substance addiction, while the rates for men are closer to 14%.1However, this gender gap seems to be narrowing in the U.S., especially for alcohol abuse.2 When it comes to the type of substance, women and men abuse these substances at similar rates, with the only exception of alcohol, which is still being more abused by men.1

Traditionally, substance abuse research and treatment programs have been designed with men in mind, as more men than women typically enter treatment centers.3 However, the figures seem to be changing, with 4.5 million women battling addiction in the United States. Furthermore, 3.5 million misuse prescription drugs and just over 3 million women abuse illicit drugs on a regular basis.4

Differences in substance abuse between men and women are relevant because they can impact addiction treatment needs. Women may use and respond to drugs differently than men and may also face some unique barriers to treatment.5 Keeping this in mind, treatment facilities offer specialized gender-sensitive women’s addiction treatment as well as treatment programs adjusted to the needs of men. Moreover, as age can also play a role in the patterns of substance abuse and its treatment, there are also treatment programs specially designed for teens.

Both biological differences in the sexes and sociocultural expectations that define gender can play a role in why a person may turn to substance abuse and even potentially be more prone to addiction.6

Women seem to start using drugs for different reasons than men. According to theNational Institute on Drug Abuse (NIDA), women most commonly give the following reasons for drug abuse:5

What Is the Relationship Between Women Substance Abuse and Trauma?

Some mental health issues may result from traumatic experiences. According to the National Coalition Against Domestic Violence (NCADV), one out of every three women has suffered physical violence at the hands of a partner, which increases the odds that they will face mental health issues and resort to drugs and/or alcohol to find relief.18

NIDA reports that among people who seek treatment, the number of women who suffer from post-traumatic stress disorder (PTSD) as a result of physical or sexual trauma is higher than the number of men.7

How Does Cultural Expectations Affect Substance Abuse treatment In Women?

In addition, the cultural expectations of women as wives and mothers can raise stress levels and present further issues that are unique to this gender. Due to these expectations and their role, women may hide their addiction and substance abuse from their families and loved ones. They may also be less likely to seek treatment, which makes the addiction issue even worse over time.8 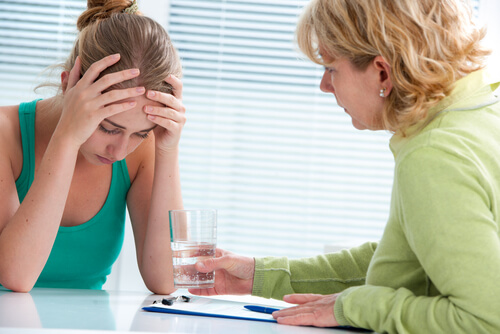 There are certain hormonal influences and differences in how drugs affect brain chemistry that are unique to women.

How Does Gender Affect Drug Metabolism?

Women metabolize drugs and alcohol at different rates than men. A woman will develop a dependence on alcohol more quickly than a man due to several factors. Men often weigh more than women and women have lower levels of two important enzymes that are involved in breaking down alcohol, resulting in more alcohol in their bloodstream.5 The drug-induced changes in brain chemistry may occur faster, leading more quickly to drug dependence, which can then progress to compulsive drug use and addiction.10

It has been established that women may be vulnerable to abusing drugs as a result of problems with hormones, menstrual cycle, fertility, and menopause. For example, researchers found that the greatest responsivity to stimulants occurs during the follicular phase of the menstrual cycle, in which estradiol levels are high and progesterone low.11

Women may also be more sensitive to pain sensations, which can make drugs seem like an effective method for self-medication. Women are generally more likely to be prescribed pain medicine than men are, and in recent years there has been a notable increase in prescription drug abuse among women in the U.S.12

When it comes to mental health, females are more likely to exhibit the symptoms of mental health issues such as anxiety or depression, which can make them more susceptible to abusing drugs as a way to cope.6

How Does Women’s Inpatient Rehab Work?

Benefits Of A Women’s Alcohol And Drug Rehab Program

The research that compares the effects of gender-specific and standard substance abuse treatment is still ongoing, and it is still early to talk about long-term results.1 Nevertheless, there are for sure several important advantages of gender-sensitive addiction treatment for women. The most commonly listed are the following ones:14

These factors are relevant for creating an addiction treatment environment where women would feel safe and supported, so they would be more likely to seek help for overcoming their addiction.

What Are the Barriers to Drug Addiction Treatment for Women?

Research says that women are less likely than men to obtain any treatment for substance use disorders.14Even when they acknowledge that they have a substance issue, there are some potential barriers to treatment that may be unique to women. The most commonly listed are the following ones:15