Although both men and women may consume drugs for different reasons, there are certain gender-related biological and sociocultural issues that have a significant impact on substance abuse in men.

How Does Addiction Affect Men?

Research results show that men use alcohol and drugs more often and in greater quantities than women, irrespective of age and race.1

According to the official statistics of the US Department of Health and Human Services, there are certain patterns in drug addiction that seem to be related to gender:2

What Are the Possible Causes of Addiction Specific to Men?

In addition to some biological differences between men and women that play a role in addiction and treatment, gender roles and expectations can also be quite influential.3 For example, due to cultural expectations or peer pressure, men are expected to engage in certain rituals or rites of passage, which in many cases involve alcohol.

Another risk factor for men is that traditional masculine roles may hinder men from seeking help for both physical and emotional problems. Many men find it hard to talk about feelings. In such situations, they may resort to drug consumption so as to get instant relief and handle difficult emotions.4

These factors are taken into account when designing effective men’s addiction treatment plans. It is of vital importance to tackle these issues in order to overcome addiction. 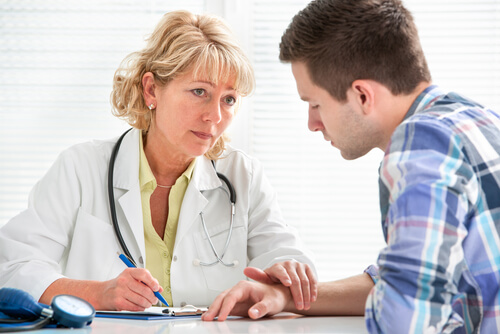 The Stages of Addiction in Men

Men and women may go through different experiences during the stages of addiction5.

In the initial acquisition stage, men can sometimes engage in more risky behaviors than women do.5

However, the escalation of addiction, which is the second stage, seems to be slower in men than in women. It is also a tendency for men to stabilize at lower doses of drug usage than women during the maintenance stage.

When it comes to the withdrawal stage, it has been evidenced that in cases of alcoholism men tend to experience stronger symptoms than women. Finally, relapse rates also tend to differ across genders in the final stage. Men are less likely to relapse and their periods of abstinence are generally longer.6

3. National Institute on Drug Abuse. (2020). Sex and gender differences in substance use.