Opioid is a naturally occurring substance that is extracted from the poppy plant, Papaver somniferum. Narcotics like morphine are derived from opium, which has powerful mind-altering and pain-numbing effects. Within the United States, opium is considered a Schedule II controlled substance as it does have some medicinal use. However, it also has a very high risk for abuse, diversion, and addiction, the Drug Enforcement Administration (DEA) reports, which is why some individuals turn to opiate addiction treatment programs.1

Opiate addiction treatment is typically administered at specialized facilities that offer programs carefully designed for this type of addiction. Such programs are tailored to the specific needs of each patient, but often include safe and controlled medical detoxification, behavioral therapies, group therapy, relapse prevention programs, and various complementary treatment methods.2

Opium was first recorded as being cultivated in Southwest Asia in lower Mesopotamia in 3400 BC when the Sumerians referred to it as the “joy plant,” the DEA Museum publishes. Opium growth, cultivation, and use spread quickly along the Silk Road, making its way through the Mediterranean into Asia and then all the way to China. The Opium Wars of the 1800s and subsequent Chinese immigration brought opium to the US where opium dens (places where people could buy, sell, and smoke opium) sprung up. Opium poppy plants thrive in warm and dry climates. Today, much of the opium grown in the world comes from the Middle East, although it is also grown in Latin America as well.3

There are hundreds of opium derivatives that fall into the category of opioid drugs, which are common drugs of abuse and also highly addictive in nature. The National Institute on Drug Abuse (NIDA) reports that around the world 26.4-36 million people abuse opioid drugs today.4 One of the most commonly abused opioid drugs is heroin, an illegal and highly addictive drug synthesized from morphine, which is extracted directly from opium resin. 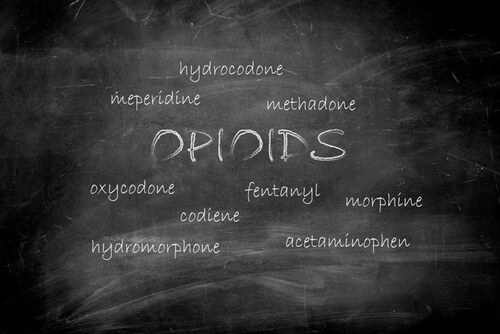 How Are Opioids Abused?

Opium is mostly marketed as a fine powder that is brownish in color, although it can also be sold as a liquid or a solid. It may be taken in pill form, injected, or smoked when abused. Many times, individuals may use an opium pipe to smoke the drug. It may also be mixed with other drugs, like marijuana in a combination termed Buddha.

What Are the Effects of Opioids Use?

As a powerful central nervous system depressant, opium lowers anxiety, dulls pain sensations, and slows respiration, blood pressure, and heart rate, while producing a euphoric and relaxing “high” that is similar to the effects of heroin.

When individuals are under the influence of opioids, they may appear to be “on the nod,” cycling between being conscious and unconscious. Movements may be sluggish, and motor control is impaired. Dry mouth, skin flushing, and constipation are additional side effects of opioid use.

These substances also disrupts normal brain functioning, making it difficult to think clearly and make sound decisions. A person may then take bigger risks than normal when using opioids and act in ways that are out of character.

People may think that because opium is a natural substance, coming from a plant, it is not as dangerous as other drugs. This is not the case, however, as opioid use carries a high risk for physical and psychological dependence, overdose, and addiction. These dangers increase with long-term regular use, which is why seeking adequate treatment for opioid addiction is highly recommended among users.4

How Common Is Opioid Overdose?

Overdose deaths from opioid drugs have reached epidemic levels. The Centers for Disease Control and Prevention (CDC) reports that 91 people die from an opioid overdose daily in the US. Opium, and other opioid drugs, can overwhelm the system, causing a person to struggle to breathe or stop breathing altogether.5

As mentioned, body temperature, blood pressure, and heart rate are all lowered with the presence of opium in the bloodstream as well. During an overdose, skin will likely be cold and clammy to the touch, and fingernails and lips may appear bluish in color. Mental functions will be impaired, and a person may lose consciousness and be difficult to awaken.5

The CDC warns that over 33,000 Americans died from an opioid overdose in 2015. Opioid overdose is often reversible with the rapid administration of an opioid antagonist such as naloxone (Narcan). The antagonist binds to opioid receptors in the brain and essentially “kicks off” the opium in order to reverse its effects. During an opium overdose, the brain can be deprived of oxygen, which can result in brain damage that may not be entirely recoverable, however. The sooner the antidote is administered, the better the odds that the damage can be overturned.6

What Are the Risks of Mixing Opioids and Other Drugs?

When opium is mixed with other drugs, the side effects may be amplified. As a result, it may be more difficult to reverse an overdose when polydrug use is present, sometimes requiring multiple doses of the antagonist to do so.6

What Are the Side Effects & Health Risks of Opioid Use?

In addition to the risk for overdose, opioid abuse can have various negative side effects. Opium disrupts the way the muscles in the bowels work, which can cause constipation. It can also dry out the mucus membranes in the nose as well as cause dry mouth.

The way a person takes opioids can result in specific risk factors as well. For example:6

NIDA warns that heroin use (and therefore also opium abuse) can cause kidney, liver, and lung complications when used long-term. It can also result in infections around the lining of the heart and its valves, and also potential skin abscesses. Opium also causes physical and psychological dependence when taken regularly.7

Therefore, it’s important for users to learn about different opioid addiction treatment options. They should consider finding a program that suits their unique needs to prevent long-term health consequences and regain control over their lives.

What Causes Opioid Dependence and Withdrawal?

Opioids interferes with the way the brain works normally by binding to opioid receptors and causing a flood of dopamine. Dopamine is one of the brain’s chemical messengers that serves to send signals throughout the central nervous system. These signals tell a person when to feel happy, help to control movement, and are involved with memory, learning, and sleep functions.

When levels of dopamine are artificially enhanced via opium interaction, the brain can stop producing it and moving it around as it normally would. Then, when opium processes out of the body after use, levels can drop. Low levels of dopamine can cause:

What Are the Symptoms of Opioid Withdrawal?

As the brain becomes physically dependent on the presence of opium to keep moving its neurotransmitters around, significant withdrawal symptoms can occur when opium isn’t active in the bloodstream. Opioid withdrawal can be intense, and the National Library of Medicine (NLM) publishes that it generally begins within about 12 hours after the last dose of an opioid drug.8

In addition to the above symptoms, opium withdrawal symptoms can include:8

Withdrawal symptoms typically peak within 2-3 days and then begin to taper off. Overall, the majority of withdrawal symptoms usually last about a week while insomnia, depression, and drug cravings may continue for a bit longer.

Stopping opioid use cold turkey is not recommended when a person is physically dependent on it, as the flu-like physical and emotional symptoms can be difficult to endure. Addiction is often a side effect of chronic opioid use, as regular use can quickly lead to compulsive use and a loss of control over the ability to regulate how much of the drug is taken at a time and how often.8

The American Society of Addiction Medicine (ASAM) reports that over 2.5 million people battled opioid addiction in the United States in 2015. Addiction represents an inability to stop taking the drug despite significant substance-related problems. It is considered a brain disease that can be managed with professional treatment for addiction to opioids.9

Due to the potential severity of opium withdrawal, treatment for opioid addiction generally begins with detox. The most comprehensive form of detox is medical detox, which is usually provided in a specialized facility where an individual remains on site for several days while opium and other opioids process out of the body.

Opioids may be slowly tapered off over a safe period of time, lowering the dosage in a controlled fashion to avoid the sudden negative reaction of stopping it all at once. Vital signs are monitored around the clock, and medications can be used to manage withdrawal symptoms during medical detox. Medically supervised substance abuse treatment may help patients reclaim their lives and maintain sobriety.

“Take our free, 5-minute substance abuse self-assessment below if you think you or someone you love might be struggling with substance abuse. This evaluation consists of 11 yes or no questions that are designed to be used as an informational tool to assess the severity and probability of a substance use disorder. The test is free, confidential, and no personal information is needed to receive the result. Please be aware that this evaluation is not a substitute for advice from a medical doctor.”

What Replacement Drugs Are Used in Opioid Treatment?

Replacement opioid agonist drugs like buprenorphine or methadone are often helpful in the treatment of opioid addiction as they are long-acting agonists that can be taken less often to keep cravings and withdrawal symptoms to a minimum. These, too, can be tapered off slowly over time.

Opioid addiction is often treated with behavioral therapies in either an inpatient or outpatient facility for treating addiction. The type of treatment model preferred will depend on a person’s specific needs and will vary from person to person. A detailed assessment is generally performed by a highly trained professional prior to admission into a program in order to ensure the right fit.

Both outpatient and residential addiction treatment models include therapy, support groups, and relapse prevention programs. Group and individual therapy sessions can help clients to modify potentially self-destructive behavior patterns and improve self-reliance and self-esteem. Triggers that may induce cravings or raise stress levels are explored, and new coping mechanisms are learned. Families and individuals may attend therapy as well, which can help to enhance communication and improve the workings of the family unit overall. Any potential co-occurring disorders should also be managed and treated through integrated methods during opioid addiction treatment.

Support groups are a great way of connecting peers with similar circumstances in order to provide encouragement and help to prevent relapse. Clients generally begin attending 12-Step or peer support meetings during treatment and continue attending them once they successfully complete a rehab program.

Complementary treatment methods may also be included in an opium addiction treatment program. These may include the following options:

Each program should be specifically tailored to the person receiving care to improve recovery and overall health and happiness on a long-term basis.2