How Long Do Opioids Stay In Your System?

The category of opioids covers the entire group of drugs that have an impact on the opioid receptors of the nervous system, including both illicit drugs and prescription pain relievers. The term opioid also includes opiates, which are natural opioids obtained from the opium poppy seed, such as heroin, morphine, and codeine.1 Opioids differ in terms of their metabolic pathways in the body, and there are also differences among individuals in terms of their ability to metabolize opioids drugs.2

It is estimated that about 2.1 million people in the U.S. have an opioid use disorder. 3 A study from 2017 found that over 60,000 people died from opioid overdose in the past year, which is why the US Department of Health and Human Services declared a public health emergency.4Some opioid medications such as Darvocet were even banned. These figures include both cases of heroin overdose and cases that involve prescription opioids such as oxycodone (Oxycontin) or hydrocodone (Vicodin) , which are the most commonly prescribed opioid medications.5

One of the tools to keep this serious public health concern under control is testing the patients who are prescribed long-term opioid therapy. Opioid testing makes it possible to monitor compliance with therapy and screen the patients for possible abuse of the prescribed drugs or non-prescribed or illicit drugs, so as to lower the risk of developing disorders or overdosing.6 In addition, opioid drug testing is also done for the purpose of monitoring patients in opioid addiction programs and evaluation of opioid-intoxicated patients.7 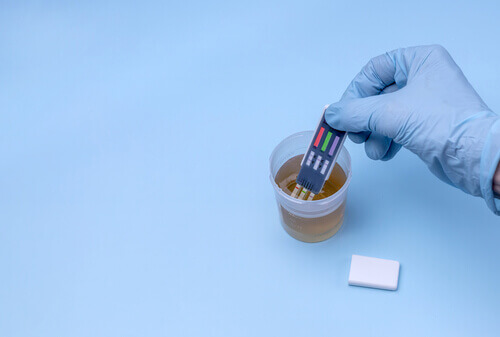 Before entering systemic circulation, most opioids are processed in the liver.2 This is called first-pass metabolism, i.e. substance metabolism that takes place in one organ, so lower concentrations reach the circulation or the site of action.8

Opioids are generally lipophilic, which allows them to easily bind to fatty tissues. When they are metabolized in the body, they are turned into hydrophilic forms, so they can be eliminated via urine.2

An important enzyme for drug metabolism is CYP3A4 and in case a person who is taking an opioid is also taking other drugs that are substrates, inhibitors, or inducers of CYP3A4, this increases the risk of drug interactions and potential opioid overdose. In addition, there are genetic variations in the activity of the enzymes that break down opioids, and consequently opioid metabolism.2

Another factor that has an influence on opioid half-life and activities of opioid metabolites are existing physical conditions, namely liver and kidney diseases. The peak level and plasma concentrations of morphine are significantly higher in patients with cirrhosis. Similarly, kidney impairment has an influence on elimination of opioids through urine. Since renal function decreases with age, opioid dosing should be done with extreme caution in older patients.2

An opioid test can be done using samples of urine, blood, saliva, sweat, and hair.9 In opioid addiction programs, testing is done in the following cases:10

Tests differ in terms of resources necessary for administration, sampling, and detection times.

Urine testing is generally the best developed and most commonly used drug detection method used in substance abuse programs.10 The advantage is that drugs are present in higher concentrations in urine than it is the case with other samples, but a disadvantage is that the person may cheat by substituting the sample or tampering with it in other ways.9

Qualitative testing is done by using immunoassay tests that detect whether an opioid drug is present in the body. However, these tests do not differ between all types of opioids, as different drugs can have the same opioid metabolites. Moreover, these tests are not 100% accurate, so it may be necessary to do further laboratory tests.11

Quantitative testing is done by using gas or liquid chromatography spectrometry tests. These opioid detection tests are more demanding in terms of laboratory resources but they detect exact drug levels and differentiate all types of opioids.11

An opiates blood test detects drug use that took place between 2 and 12 hours before taking the test, which makes its time window shorter than it is the case with urine. Moreover, a blood test requires more skill and equipment to take a sample, so it is usually performed only in emergency situations.9

Since hair grows at the rate of ½ inch per month, it cannot be used to detect immediate drug abuse. However, an opiates hair test can be used to accurately detect substance abuse history in the period of even up to 4 months. The sample is easy to collect and the test is very reliable.10

Saliva samples are also easy to obtain but most substances disappear from saliva already in 12 to 24 hours. Therefore, saliva tests can be done only to detect immediate use.10

Sweat tests are done by means of a sweat swipe or a sweat patch. It is a newer method that is not used very commonly as still few facilities can analyze the samples. Morphine, heroin, and codeine are traceable in sweat up to 14 days following the last use.9

When a person who is dependent on opioid drugs stops taking them suddenly, they typically experience withdrawal. Some withdrawal symptoms are merely unpleasant, such as runny nose, but sometimes they can be so severe that they pose a serious health threat.13,14 It is therefore recommended that the person with opioid substance abuse undergoes substance abuse testing and treatment at a certified facility rather than quit “cold turkey”, i.e. without medical supervision. In case the symptoms are severe, the person may need 24-care in an inpatient setting.13 After the risk of severe complications is reduced, they may proceed with outpatient opioid treatment after consulting their medical specialists on the required level of treatment and care.

The gold standard in treating opioid addiction is medication-assisted treatment, which consists of an individually tailored combination of medications and behavioral therapy that can stabilize the patient both physically and psychologically, overcome addiction, and prevent relapse.15 This means that the purpose of treatment is not only to get opiates out of the system safely through medical detoxification but work on issues that have led to substance abuse so that the person would not go back to using drugs. There are FDA-approved medications for substance use disorders that can be prescribed only by treatment professionals, but there are also some ancillary over-the-counter medications that can help the patient overcome withdrawal symptoms more easily.16

Where to Find Guidance on Opioid Addiction, Testing & Treatment

Help is available to individuals struggling with opioid addiction 24/7 thanks to the availability of treatment centers and their helplines. American Addiction Centers has a toll-free helpline that can help the treatment seeker find the right treatment option and go through the admission process quickly and efficiently. There is also a heroin hotline specifically designed to help people struggling with heroin.In addition, the website offers information about treatment options, locations, and specific treatment addiction facilities offered by American Addiction Centers. Since addiction treatment can be covered by insurance, it is possible to immediately check insurance coverage by punching in the insurance number into an online form, or by calling a helpline to check either insurance coverage or other payment options.