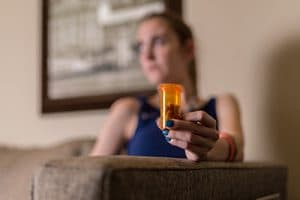 Benzodiazepines make up a class of drugs that is highly addictive. At the same time, they are some of the most prescribed drugs in the United States. It is partly because of this that there is a prescription drug abuse epidemic, as researched and reported by the Centers for Disease Control and Prevention, that is putting many lives and communities at risk around the country.

Ativan is one of the types of benzodiazepine that is most often prescribed. Through both illicit use and misuse of legitimate prescriptions, this medication is contributing to the prescription drug emergency. Nevertheless, with an understanding of how Ativan addiction occurs and how it can be treated, there is hope that people struggling with Ativan abuse can get the help they need.

Also known as lorazepam, Ativan is a prescription medication that, according to MedicineNet, is most often used to treat anxiety. However, like many other benzodiazepines, it can also be used to treat other conditions, including:

While this medication can be very useful when used properly, it causes changes in brain chemistry, specifically in the GABA and dopamine systems, that can quickly lead to tolerance, dependence, and addiction.

Legitimate Prescription Misuse and Illicit Use

Addiction to Ativan can occur through two different, general paths. Most commonly, as described by case studies from the Yale Journal of Biology and Medicine, individuals who are prescribed Ativan can develop addiction through prescription misuse, which can either be a result of poor prescribing practices that keep the person on the medication longer than recommended or by the person deciding to misuse the drug.

This can happen, in particular, if the individual develops tolerance for the drug, meaning that the effect of the Ativan begins to lessen over time, which causes the person to increase the dose or frequency of use. Another way it can happen is if the individual takes the drug for longer than recommended or uses it illicitly to self-medicate without the support of a doctor, which can result in changes in brain chemistry that lead to dependence on the drug and subsequent addiction.

Along with misuse of prescriptions, there are those who deliberately use Ativan recreationally to experience the euphoria it can cause. This type of use can lead to addiction through continued abuse or use of high dosages that result in developing dependence on the drug.

Research done through the National Survey on Drug Use and Health on benzodiazepine use and abuse indicates that Ativan is the second most commonly prescribed benzo after Xanax, having been used by nearly 7.6 million individuals above the age of 12 in 2015. In contrast, nearly 900,000 people specifically misused the drug that year, either recreationally or otherwise.

While this is a lower percentage of abuse than for some other benzodiazepines, it nevertheless is contributing to the increase in prescription drug misuse, abuse, and addiction.

Some of the most obvious signs of Ativan abuse can be observed simply by paying attention to an individual’s prescription use behaviors. These include:

There are also some symptoms and behaviors that can indicate Ativan abuse is occurring. Physical and mental symptoms include:

In addition, general signs of substance use disorders outlined by the Diagnostic and Statistical Manual of Mental Disorders include, among others:

The more of these signs present, the more likely it is that the individual is dealing with a severe substance use disorder involving Ativan.

Risks and Dangers of Ativan Abuse

Ativan abuse and addiction can lead to some severe consequences if they are not treated promptly. These include consequences to physical health, mental health conditions that include dependence and addiction, and the potential for a severe withdrawal syndrome if the drug is stopped abruptly. However, these dangers can be curtailed if the person commits to an addiction treatment program.

In addition, Ativan abuse holds a high overdose risk, with severe physical and mental consequences, up to and including the potential for death or long-term mental and physical health damage.

Health effects of Ativan abuse change with short-term use and long-term abuse. Ativan is generally recommended only for short courses of use to minimize the potential for long-term health effects, which include brain damage that leads to memory loss and possibly dementia.

As reported by the Harvard Medical School, benzodiazepines can affect memory in a way that may increase the risk of Alzheimer’s disease in seniors – one of the largest groups being prescribed these drugs. According to the featured study, taking the drug for 3-6 months increased the risk of developing Alzheimer’s by more than 30 percent. If the drug is taken for more than six months, that risk more than doubles to 84 percent.

Of course, as demonstrated above, a mental health effect of taking Ativan and other benzos such as Klonopin or Valium is the risk of physical dependence and addiction. Physical dependence on Ativan can result in the individual experiencing a severe withdrawal syndrome if the medication is stopped. This syndrome, while most common for those who have used high doses of a benzodiazepine for a long time, can also occur on low-dose benzos like Ativan after being used for only a few weeks. These potentially life-threatening withdrawal symptoms can include:

As explained in The Ashton Manual, sometimes these withdrawal symptoms can last far beyond the detox period. In fact, there is potential for a protracted withdrawal syndrome that can cause psychological effects to linger for months or even years after use is stopped.

Also like other benzos such as Valium or Xanax, Ativan abuse comes with a high risk of overdose. In fact, the National Institute on Drug Abuse reports that nearly 9,000 people died of benzodiazepine overdose in 2015. This is an increase of more than four times the number of benzo-related deaths in 2002.

Symptoms of Ativan overdose include:

Medical support is required immediately to help an individual who has overdosed on Ativan, both to manage the overdose itself and to deal with dangerous withdrawal symptoms that can make the situation worse. The risk of severe overdose can be increased if the person is consuming alcohol or opioids at the same time.

While it is possible to recover from a benzo overdose, there is a risk of severe brain injury and damage due to the loss of oxygen that comes from suppressed breathing, resulting in severe consequences to the individual’s cognitive capabilities and quality of life.

Because of the many consequences of Ativan abuse and addiction, it is important to get treatment as quickly as possible for an Ativan-related substance use disorder. Research-based professional help from an established, certified program can help the person achieve recovery through a variety of established therapies, including:

With motivation and commitment, an individual who undertakes addiction treatment for Ativan abuse can gain the skills and tools needed to stop using Ativan and manage the substance use disorder.