What is codependency and what are its symptoms?

A codependent relationship is dysfunctional in that a person’s self-esteem and happiness are completely tied up in their partner’s wellbeing instead of their own. Codependency involves unhealthy helping and even enabling behaviors, a lack of inner boundaries, and a need to feel needed.1 While codependency most frequently applies to romantic relationships, such as spouses or partners, virtually any relationship can be affected by codependency.

Codependency often goes hand in hand with addiction, as spouses or partners of someone battling addiction may regularly enable them to continue problematic drinking or drug-using behaviors, making excuses for them and helping them to cover it up. A codependent spouse often enables the user by making excuses for them, cleaning up their messes, and taking care of them when they are intoxicated or sobering up.1

Someone who suffers from codependency needs to be needed and goes out of their way to help their partner or loved one regardless of any personal consequences. This is, of course, unhealthy and does not serve either person in the relationship as it allows the same mistakes and unhealthy behaviors to be perpetuated and ignored.

A codependent person may appear selfless and strong; however, these types of relationships are highly dysfunctional and unhealthy. Codependent relationships and maladaptive behaviors are unlikely to improve on their own. In fact, they will likely get worse over time, Psych Central warns.2 With treatment that targets these behaviors along with other mental health problems, codependency is reversible, and relationships may be salvageable. 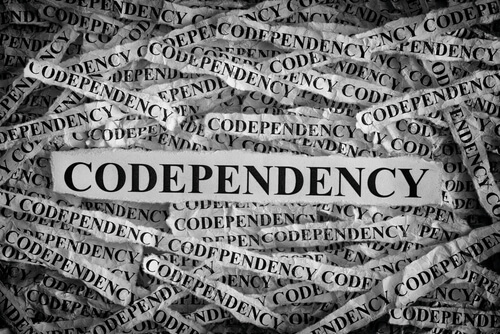 Someone suffering from codependency will not be able to self-soothe and will rely on their partner in order to meet their own emotional needs.3 Codependence can cause an irrational fear of rejection and being alone. Codependence can be one-sided, or both partners may suffer from it.

In a codependent relationship, individuals put the other person’s needs before their own, often sacrificing their own integrity and sense of self in the process. Codependency can cause a person to have an overinflated belief that they alone are responsible for affecting the beliefs, thoughts, emotions, and behaviors of those around them, Psych Central publishes.4

A codependent relationship allows the parties involved to avoid their fears and problems, serving to promote bad behavior and maladaptive patterns instead of improve upon and learn from them, Psychology Today reports.5

Although a number of predictors have been proposed for codependency, there is no consensus on the exact causes of the behavioral pattern. Research suggests that the following factors may have a role in developing codependent tendencies:6

While childhood abuse, traumatic experiences, and exposure to narcissistic behaviors of parents and/or partners seem to play a role, it is difficult to predict codependency on the basis of any of these factors alone.

Signs and Symptoms of Codependency

Generally speaking, there are two main forms of codependence: passive and active.9 Someone who is passively codependent is more likely to avoid conflict and confrontation, going to great lengths to keep things smooth and not rock the boat. Active codependency is often more manipulative, and an individual may try to push their partner into behaving a certain way in order to fill their own emotional needs.

How to Stop Being Codependent?

It is important for both partners to see a therapist and undergo treatment when codependency is involved. One spouse may battle addiction and the other codependency, for example, and both will need to work through the negative and destructive emotions and patterns of behavior that are attached to each issue.

Spouses, or partners, will need to learn how not to enable a loved one who suffers from addiction. Families and spouses are encouraged to attend some form of treatment and therapy that offers help for codependency with a loved one who is battling addiction while they are also in a treatment program.10

Codependency can hamper addiction treatment and recovery if it isn’t addressed and managed at the same time as the addiction issue. Addiction treatment programs often offer support and educational programs for families and loved ones of those in treatment to help them better understand the disease of addiction and their own role in recovery going forward.11 With therapeutic intervention, a codependent relationship may be improved, and both partners may be able to recognize the dysfunctions within the relationship and move forward in a healthier manner.