The heroic duties of firefighters, police, paramedics, and emergency medical technicians are crucial to society. Unfortunately, the experiences of first responders can be extremely emotionally draining. Being constantly exposed to life-threatening situations and working long hours under strenuous conditions may put first responders at a greater risk of developing post-traumatic stress disorder and depression compared to the general population.

Why Do First Responders Have PTSD?

First responder jobs are characterized by serious threats to personal safety, long working hours, frequent and long shifts, poor sleep, and physical hardships.1 In addition, emergency interventions may involve witnessing severe injuries in people, seeing dead bodies or body parts, or experiencing the loss of colleagues. Despite being a part of the job, these factors can be quite traumatic for an individual.

Similarly to army veterans experiencing trauma, first responders are at a 30% risk to develop conditions such as post-traumatic stress disorder (PTSD) and depression. This likelihood is higher compared to the general population, where this rate is 20%.2

The psychological consequences of traumatic events are sometimes not immediate. Many individuals do develop PTSD symptoms within 3 months of the trauma, but symptoms may also appear later and often persist for months and sometimes years.3

Substance abuse is one of the responses to the trauma, which is the reason why these professionals often need and receive special attention in substance abuse prevention and treatment, and why substance abuse treatment and PTSD treatment for first responders often go hand in hand.1

What Mental Disorders Are Caused by Trauma in First Responders?

An overview of the statistics of the Substance Abuse and Mental Health Service Administration (SAMHSA) shows that:4 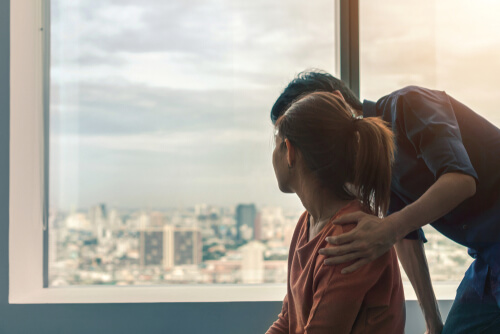 In a survey that explored how they manage traumas, many first responders report that they are expected to minimize the impact of traumatic exposures in their professional and personal lives. To that end, they may resort to substance use or high-risk behavior.5

Like many other people, first responders are often reluctant to report that they are facing mental health issues and seek treatment. This often happens for the fear of being stigmatized, especially in their working community, where the norm is to be heroic, strong, and able to bear more than other people.

How Do First Responders Deal With Trauma?

How Are the Consequences of Traumas Treated?

In some cases, medications used for symptoms of depression and anxiety can be helpful in PTSD treatment for first responders. The National Center for PTSD lists the following 4 medications that are recommended in PTSD treatment (brand names are written in parentheses next to the generic names):6

As in other mental health issues, psychotherapeutic methods are also highly recommended in PTSD treatment for first responders. According to the National Center for PTSD, the trauma-focused psychotherapies with the strongest evidence are the following:6

In cases where substance abuse co-occurs with PTSD, there are a number of treatment programs that address the needs of patients with this dual diagnosis. Many treatment centers pay special attention to the realities of work of first responders and their issues, so they offer counseling sessions and set up therapeutic groups for first responders only.