Inpatient Drug and Alcohol Rehab Centers for Couples Near Me

Although the field of addiction treatment has traditionally seen substance abuse as an individual issue, it has been recognized that the social context plays a significant role both in substance use disorders and their treatment. Intimate partnerships are especially important in this respect. The nature of the relationship and the lifestyle of a couple indeed play a role in substance abuse and can have an equal significance in motivation for treatment, treatment choices, and maintaining abstinence.1

For this reason, treatment centers offer rehab for couples, i.e. programs that make it possible for partners struggling with alcohol or drug addiction to be admitted to treatment together and go through the process that can help them work on their relationship issues and build strong mutual support for abstinence.2

Rather than being couples rehab centers that only admit couples, these are typically regular treatment facilities that offer couples rehab programs not only by enrolling both partners into treatment but by including treatment components that make it possible for people to work on overcoming addiction in the context of their relationship.

How Does Substance Use Disorder Impact Relationships?

Substance abuse and the quality of the relationship between partners often directly influence one another: Substance abuse may lead to conflicts in the relationship, which in some cases can turn from arguments into violence. On the other hand, to reduce the stress resulting from this tension, it is not uncommon that one or both partners turn to alcohol or drugs. This can sometimes turn into a vicious circle which over time intensifies both issues and which may be difficult to break without partners’ treatment and rehab.3

According to the American Association for Marriage and Family Therapy, there are several signs that substance use is taking its toll on relationships and family life:3

The category of people who are especially vulnerable refers to the ones who are codependent. These individuals are typically more focused on their partners’ well-being and may even enable negative behaviors. For this reason, they would do anything that the partner asks them to do and stay in the relationship even if they know that it is harmful.4

They would take over the responsibilities of the partner and protect them from the consequences of using drugs or alcohol. Even though their intentions toward their partner are good, co-dependent persons do nothing to stop but rather foster substance abuse, which is the reason why they are also referred to as enablers.4 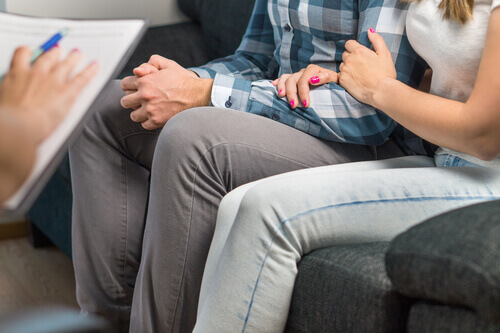 How Do Substance Abuse & Relationships Relate?

As the nature of relationships can trigger and foster substance abuse, this relation also works in the opposite direction. Partners can motivate each other to enroll in treatment and maintain abstinence.1 People who engaged in behavioral couples therapy (BCT) as a part of rehab for couples on drugs demonstrated greater treatment success than patients who received only individual counseling.5,6

On the other hand, in case the relationship is such that it would obstruct the treatment process (for example, if there is violence or abuse), individual rather than couples rehab treatment might be a better option.

BCT is a treatment approach based on the assumption that patients with substance use disorders who have healthier relationships with better communication are at a lower risk of relapse. The two key goals of BCT intervention are:2

Couples who enroll in BCT-integrated couples rehab programs are usually married or have been living together for at least a year. They attend treatment sessions together over a 3 to 6 month period. The number of sessions is usually 12 to 20. During this period, couples receive therapists’ instructions, practice newly acquired skills under supervision, and receive homework assignments which they review together in therapy sessions.2 A sobriety contract and calendar are tools used for tracking performance.7

BCT can start immediately after detoxification or a short-term intensive rehab program, or in situations when treatment seekers are interested in this form of outpatient counseling.2

The conditions that need to be met are:2

How To Find Drug Rehab Centers For Couples Near Me?

Treatment centers offer several options for couples who seek treatment. Generally, they all use the standard therapies of substance abuse treatment but include the relationship counseling component or the family therapy component.