What is Detox? - Drugs & Substance Abuse Detox Treatment Near Me

Substance use disorder (SUD) is defined as a chronic medical condition that involves uncontrolled use of addictive substances despite the harmful consequences.1 The data collected through the National Survey on Drug Abuse and Health in 2017 show that 19.7 million people in the U.S. were struggling with an SUD. Out of this number, 14.5 million people suffered from alcohol issues and 7.5 million had an illicit drug disorder. The latter category includes both illegal drugs such as heroin, but also prescription medications that can be diverted and abused.2

The severity of the disorder may vary, but what all cases of substance abuse have in common is that people with SUDs put themselves at very serious health and safety risks, and are unable to stop substance use. This happens because substance use has disturbed the biochemical balance in the body and the person is no longer able to function normally without using the drug. The person experiences intense cravings and unpleasant physical symptoms between two doses of drugs or alcohol, which is referred to as dependence and withdrawal.1

Despite being rather complex, substance abuse disorder is a treatable condition, regardless of whether the disorder is severe or milder.1 There are many treatment modalities and options, but the first step in any treatment program is detoxification, also often referred to as detox substance abuse treatment. The purpose of this process is to remove the toxins from the body of the person who is suffering from substance dependence or is intoxicated.3 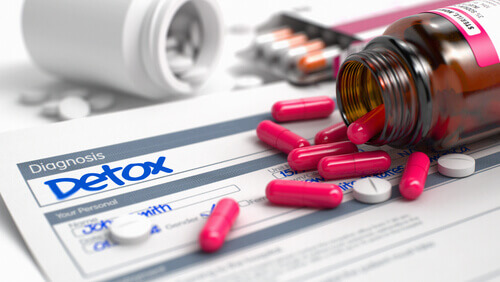 When Is Medical Detox for Substance Abuse Treatment Necessary?

In general, the more severe a person’s dependence condition is, the more likely it is that they will need medical support during detoxification. There are several risk factors that can influence one’s drug dependence.4

An additional relevant factor that qualifies a person for a medically supervised substance abuse treatment is the existence of a co-occurring disorder such as depression, anxiety, or PTSD. According to the estimates from 2019, this is not a small number of people who are struggling with substance abuse—9.5 million people in the U.S. suffer from co-occurring disorders.6

When both a mental health or medical condition are present in someone who is battling addiction, medical detox is needed to safely manage all potential medical and mental health issues that can arise during withdrawal. Co-occurring disorders can complicate and exacerbate each other, and they should be carefully monitored and managed with specialized care.3

What Are the Withdrawal Symptoms seen during Medical Detoxification?

Medical detox is the most comprehensive form of detox that provides safety and security in a controlled environment. During detox substance abuse treatment that is medically supervised, a person’s vital signs can be continuously monitored, and medical care can be delivered as needed.3

Emotional side effects of withdrawal can be significant and include:8

One of the most dramatic forms of withdrawal is called delirium tremens (DTs): a condition that involves seizures, fever, significant confusion, and psychosis. It usually occurs in cases of alcohol and sometimes benzodiazepine abuse. About 3-5% of people battling alcohol withdrawal may suffer from DTs.9 DT is especially dangerous as it may begin later than normal withdrawal, i.e. a few days after stopping drinking.10

Medical detox can protect the person from these potentially even life-threatening conditions.3 Treatment facilities provide physical stabilization through medical means, while mental health support is provided by trained professionals to keep the patient psychologically stable.

How does Medical Detoxification for Drugs and Substance Abuse Treatment Works?

Medical detox is in principle the initial stage of an addiction treatment program.11 The process of detox substance abuse treatment consists of three essential components:3

Medical detox is not a standalone treatment for drug abuse and addiction. Instead, it should be viewed as an important first step. After a detox program, individuals should enter directly into an addiction treatment program that can continue to build on relapse prevention tools, healthy habits, coping mechanisms, medication management, and more.11

What Are Possible Settings of Detox Programs for Substance Abuse Treatment?

There are several possible settings, i.e. levels of intensity of care that the patient receives during detox substance abuse treatment.3

Which Medications Are Used in Substance Abuse Detox Programs?

There are several categories of medications used in detox substance abuse treatment.

Medications that belong to the category of benzodiazepines counteract the side effects of withdrawal from alcohol and central nervous system depressant drugs. Long-acting benzodiazepines, such as diazepam (Valium) and chlordiazepoxide (Librium), can stabilize brain chemistry to minimize the rebound effect of the brain’s neurotransmitters. These long-acting benzodiazepines can be slowly tapered off in a controlled manner on a set schedule until they are no longer necessary.8

These medications are used in treatment programs for opioid use disorders. Short-acting opioid drugs like heroin and fentanyl are often replaced with the longer-acting full opioid agonist methadone (Methadose, Diskets, Dolophine). Methadone can be distributed once daily to keep withdrawal symptoms and cravings at bay. The dosage can then be weaned off over a set period of time.12

Partial agonists containing buprenorphine (Subutex, Buprenex, Butrans) work in a similar fashion. However, they have less potential for abuse as they do not create the same “high” as full opioid agonists. They also have a plateau feature where they stop working after a certain dosage is taken.12

Antidepressants are mood-stabilizing drugs that can be very helpful during medical detox, and medications such as desipramine (Norpramin) can aid in minimizing some of the emotional side effects of withdrawal.13

Some over-the-counter medications are also used for alleviating withdrawal symptoms. These are drugs used against symptoms such as nausea, fever, muscle pain, or insomnia.14

In addition to medications used in detox substance abuse treatment, providers often introduce vitamins, supplements, and a nutritious meal plan to counteract the malnutrition that accompanies drug abuse and addiction. Fluids may need to be given intravenously during medical detox, as individuals are often significantly dehydrated when entering detox.8

What Are Rapid and Ultra-Rapid Detox?