How Long Does Alcohol Stay in Your System? | Rate of Alcohol Digestion, Absorption & Breakdown

How Long Does Alcohol Stay in Your System?

There are significant individual differences in alcohol metabolism time. The time that the body needs to process alcohol may be even 3 times longer for some alcohol users.1 Alcohol metabolism rate and alcohol elimination rate depend on two general categories of factors:2

These differences explain why some people get intoxicated quicker than others and why some people are at greater risk for alcohol-related problems, not only alcohol addiction, but also related health conditions such as alcoholic liver disease.2 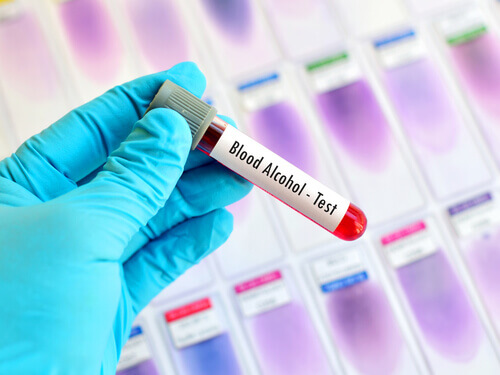 How Is Alcohol Metabolized?

When alcohol is swallowed, it is absorbed from the intestines into the veins and carried to the liver, where enzymes called alcohol dehydrogenase (ADH) and aldehyde dehydrogenase (ALDH2) break it down into compounds that can be processed and eliminated more easily.1

The level of alcohol in the blood depends on how quickly alcohol is emptied from the stomach and the metabolic processes that occur during the first pass through the stomach and liver. The first pass means that the substance is metabolized at a specific location (organ), which results in a lower concentration of the substance reaching circulation or its site of action.3

Alcohol circulates through the bloodstream and is delivered to the tissues. It is soluble in water, but hardly in fat, so the concentration and rate of alcohol absorption in tissues depend on the water content of those tissues. Very little alcohol enters fat because it cannot dissolve in fat. It diffuses faster in organs with a rich blood supply such as the heart or the lungs.4

Over 90% of alcohol is eliminated from the body by the process of oxidation, which mostly takes place in the liver, while only 10% or less is eliminated through sweat, urine, or breath.5

Unlike some other nutrients, such as carbohydrates and fat, which can be stored in the body, alcohol cannot be stored and remains in the body until it is eliminated. In contrast to other nutrients which are metabolized under the control of hormones such as insulin or leptin, in case of alcohol digestion, hormones hardly play any role and almost the entire work of alcohol elimination is done by the liver.5

The rates of alcohol digestion vary widely but if a person weighs 155 lb (70 kg), for example, the body would be able to eliminate between 170 and 240 g of alcohol per day.5

Alcohol half-life is about 4 to 5 hours, which means that after this period of time, the blood level of alcohol will be already two times lower.6

There are several factors that have an impact on the rate of alcohol absorption and the amount of unmetabolized alcohol in the body.

Biological factors may include the following:

There are also multiple environmental factors:

Alcohol Detection in the Body – Urine Test vs. Blood Test

Alcohol detection in the body is done in the following situations:8

Alcohol is traceable in blood, saliva, breath, hair, and even fingernails, with alcohol detection time varying significantly depending on the type of test.9, 10

Most people are familiar with a breathalyzer, the test often used by the police. This test measures alcohol blood levels based on the amount of alcohol that a person has in their breath. It can detect high alcohol levels already 15 minutes after the person has consumed alcohol but it usually detects highest levels an hour after alcohol ingestion.11

Alcohol blood detection time takes longer because it requires laboratory conditions. However, this is the most accurate method of establishing one’s level of intoxication. However, it is accurate only in the period of 6–12 hours after the last drink.8

Alcohol detection in urine is possible after alcohol consumption, longer than it is the case with the alcohol in blood test. Alcohol is present in urine samples up to 24 hours after drinking, and in cases of heavy drinking, it can be detected even 72 hours later.9, 12 Urine tests are the best developed and most commonly used method in alcohol addiction programs.9

The advantage of saliva tests is that they are easily administered onsite by using a reactive pad or strip, which makes alcohol detection time as short as 20 seconds.13 However, the time window for this test is shorter than for other tests. Saliva indicates a high concentration of alcohol in the blood two hours after consumption.9

Hair tests are very reliable as it is easy to take and store samples and there is less chance for tampering with the sample than in the alcohol urine test. Traces of alcohol in hair and fingernails can be detected for long periods of time, even up to 3 months.10 Since hair grows slowly, this method cannot be used to monitor current levels of alcohol or other substances but is rather used for analyzing substance use history.9

How to Get Alcohol Out of the System?

When a person consumes alcohol moderately, which is one drink in a day for women and two drinks in a day for men according to Dietary Guidelines for Americans, this alcohol is metabolized without harmful effects.14 However, binge drinking and drinking more than this amount puts people at an increased short-term risk of accidents and the following long-term health risks:15

Getting alcohol out of the system is the first step in treating alcohol use disorder. When a person is strongly dependent on alcohol, quitting suddenly may cause withdrawal symptoms, which in addition to being unpleasant such as tremors or nausea, may be potentially very harmful, such as depression, or even life-threatening, such as delirium tremens.17, 18

This is the reason why this process is generally done under the supervision of alcohol addiction treatment professionals or in consultation with a physician so that the treatment seeker can detox safely and receive appropriate psychological and medical support.18

Where to Get Help for Alcoholism

There are a number of inpatient and outpatient treatment options that have proven to help people overcome their alcohol addiction.19Effective alcohol addiction treatment is comprehensive and includes not only detox but also psychological and behavioral therapy. This aspect of treatment aims to help the patient change the patterns of thinking and behavior that have led to addiction and develop skills needed to lead an addiction-free life.20 In addition, there are also options for aftercare, such as peers support groups, that have proven to be effective in relapse prevention.21

Such comprehensive alcohol addiction treatment is offered by American Addiction Centers (AAC) in multiple locations across the U.S. The admission process is quick and easy, as timely enrollment into treatment plays a significant role in positive treatment outcomes.20

In some cases, people are in doubt whether their alcohol consumption is definitely a disorder that needs to be treated. Online self-assessment tests available on the Treatment Solutions website can be a useful tool for acknowledging that there is an issue.Another concern that people who need alcohol addiction treatment may have is financing treatment and whether it is possible to get insurance coverage. These are also possible to check on the AAC website by directly typing in the insurance number into an online form or calling the AAC helpline.