Although men consume more alcohol and experience and cause more alcohol-related incidents than women, gender gaps are evidently narrowing. Perhaps surprisingly, among adolescents and emerging adults, females are now more likely to report drinking and getting drunk in the past month than their male peers.1

In fact, research has established that there are significant gender differences related to alcohol abuse both in terms of drinking patterns and health consequences.2 The reasons for this include a wide range of biological, psychological, and sociocultural differences.

While women’s alcohol treatment may not differ in its content from alcohol treatment designed for men, treatment centers may offer separate groups for women and men. This difference in the group environment tends to serve the purpose of creating a safe and comfortable environment for individuals with history of rape or other trauma to share their experiences with the same gender.

Another gender-specific situation that determines the nature of treatment is pregnancy, which is why there are special addiction programs for pregnant women.

Research has found that there is a strong relationship between psychological and social issues affecting women and the likelihood that they will develop alcohol use disorder (AUD). These are some common predictors of AUD in women:3

Women’s alcohol treatment takes these gender-related facts into account and helps the patient overcome the issues that have led to alcohol abuse. 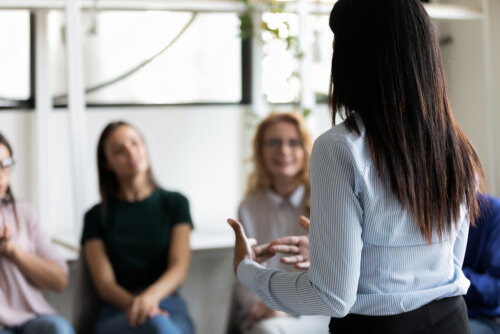 How Does Alcohol Affect a Woman’s Body?

Since men and women are biologically different, health consequences of AUD also tend to be different. Some of the most common alcohol-related health risks in women are:2

What Is Women-Focused Alcohol Treatment?

One of the key advantages of women’s alcohol treatment programs is that they are designed in such a way to attract women to seek treatment earlier. Many women feel more comfortable in women-only environments, especially the ones who have experienced abuse or violence by men.

Surveys have shown that clients in a specialized women’s rehab program were more likely to have dependent children, be lesbian, or have suffered sexual abuse in childhood than women in other programs.

Women generally benefit from supportive therapies, which means that warmth, empathy, and trust are of vital importance. An effective women’s alcohol treatment usually involves developing relationship building and parenting skills to help the person create a healthier social environment and lower the risk of relapse.

Women’s alcohol treatment should also take into consideration co-occurring disorders, such as mental issues or eating disorders, which often tend to be related with substance abuse in women.5