How Long Does Methamphetamine (Meth) Stay in Your System?

Methamphetamine, or meth, is a FDA-approved medication for long-term treatment of attention-deficit hyperactivity disorder (ADHD) and short-term treatment of obesity. It is a Schedule II drug, which means that it has a high potential for abuse and addiction.1

When abused, meth produces euphoria and stimulant effects similar to those of cocaine. It is relatively easily synthesised from inexpensive chemicals, which has made it the second most popular illicit drug world-wide.1 Statistics from 2017 showed that about 964,000 people in the U.S. aged 12 or older had a methamphetamine use disorder.2

Compared to other stimulants such as cocaine, meth duration in the system is longer. Meth metabolism is slower and a larger amount of unchanged substance remains in the body. The high concentration of meth in the synapse can be toxic to nerve terminals, which can be very dangerous.3

Another problem is that addiction to methamphetamine is one of the most difficult to treat since there is no pharmaceutical agent that can help maintain abstinence. Due to all these issues, it is advised that a person with methamphetamine toxicity undergoes treatment as soon as possible and that this treatment is managed by a team of healthcare professionals.1 There are specialized treatment centers that offer meth addiction programs, equipped for meth drug tests and treatment. 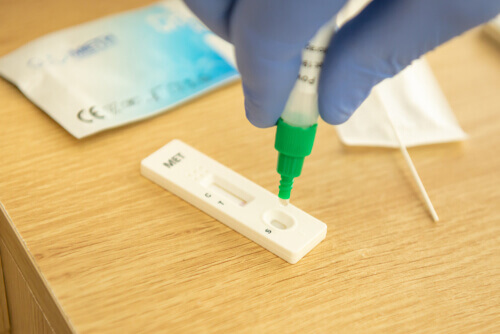 Once it starts circulating, meth reaches all organs. The highest concentration is found in kidneys and lungs, followed by stomach, pancreas, spleen, liver, heart, and brain. However, the clearance time is slowest for the brain and it can be longer than 75 min.4

While lower doses of methamphetamine result in arousal, positive mood, cardiac stimulation, better cognitive and psychomotor activities, higher doses and extended use can lead to drug accumulation, which can have dangerous effects such as cardiovascular and psychiatric impairment.2

Testing for Meth in the System

A meth drug test can be done by using samples of urine, blood, saliva, and hair.

Urine tests are the most commonly used for meth detection in the body. Immunoassay tests detect if the drug is present in the body, while gas or liquid chromatography spectrometry tests provide a quantitative insight into the amount of the drug present. Since the latter type is more demanding in terms of laboratory resources, it is primarily used to confirm immunoassay results.6 A typical urine detection period is 2-4 days.7

In addition to lab tests, there are also home drug tests. These can detect meth in urine already 2-3 hours after the last use, and this time window extends to up to 2-3 days.8

Blood tests are very accurate but they can detect only current intoxication levels, with detection time typically not being longer than 12-14 hours. A meth in blood test is therefore mostly used in medical emergencies and acute intoxication.7

Meth hair tests have the longest detection period of all tests. Since hair grows slowly, these tests cannot detect immediate drug use such as a drug test for meth using blood or urine samples, but they are rather used to get an insight into substance abuse history.7

Meth Withdrawal & Getting Meth out of the System

The unpleasant withdrawal symptoms that occur when a person stops using the drug make it hard for drug users to clean their system of meth. The main symptoms of meth withdrawal are:9

The depressive and psychotic symptoms usually resolve within a week, but the presence of craving is longer and lasts at least 5 weeks. These symptoms depend on the dosage and methamphetamine use, as well as the existence of some other mental health issues that co-occur with a substance abuse disorder. If they are very strong, they can even reach the level of panic or suicidal ideation.9

This is the reason why patients are advised to enter meth addiction programs, which can provide them with necessary support and a protective and specialized detox environment in cases where inpatient care is necessary.

In addition to meth detection in the body, meth addiction programs screen patients for co-occurring disorders to determine which treatment plan would be most suitable for the particular case. Moreover, treatment does not end with detoxification. One of the goals of effective treatment is to prevent relapse through therapy and monitoring in order to maintain long-term abstinence.10

How to Reach out for Professional Help With Meth Addiction

Getting help as soon as possible is critical for treatment success.10 To make treatment admission efficient and fast, American Addiction Centers is constantly open to treatment seekers through their 24/7 toll-free helpline. Treatment navigators who answer the phone guide the treatment seeker through the admission process, answer their questions, address all their personal concerns, and prepare them for admission into the treatment program that will best meet their treatment needs.In addition, it is possible to check insurance coverage and payment options, either by phone or by punching in the insurance number into the online form on the American Addiction Center website.

How our treatment is different?
▶