Functional Alcoholism: All You Need to Know

The stereotypical image of an alcoholic is often based on media representations and some rather extreme cases of alcohol abuse that we may witness. However, this does not necessarily reflect what alcoholism actually looks like in everyday lives of many individuals. One of the patterns of alcohol abuse that has recently gained more attention is often referred to as functional alcoholism.

Although it can severely affect a person’s health, relationships, and career, this problem often remains under the radar due to the fact that so-called functional alcoholics may not fit the stereotype and are not very common among treatment-seekers.

What Is a Functional Alcoholic?

An extensive study carried out by the National Institute on Alcohol Abuse and Alcoholism that analyzed a national sample of people with alcohol dependence found that as many as 20% of alcoholics in the U.S. are highly-functional, well-educated individuals with good income. They are typically middle-aged with stable jobs and families. About one-third of people from this category had a family history of alcoholism, about one quarter has suffered from depression at some point in their life, and around half of them are smokers.

On the other hand, those with chronic severe alcoholism, who are the most prevalent group in alcoholic treatment, actually make up only 9% of alcoholics in the U.S. In other words, the number of those who struggle with alcohol yet are able to function on what appears to be normal levels, which would often not be seen as alcoholics in their community, is a lot higher than the number of “obvious”, i.e. more severe cases.1

According to Sarah Allen Benton, therapist and author of the book Understanding the High-Functioning Alcoholic, highly-functioning alcoholics often live in denial due to the fact that they are able to work, excel academically, and provide for their family. They often believe they deserve a drink because of their hard work or stress, and that it will not affect anyone from their environment.2 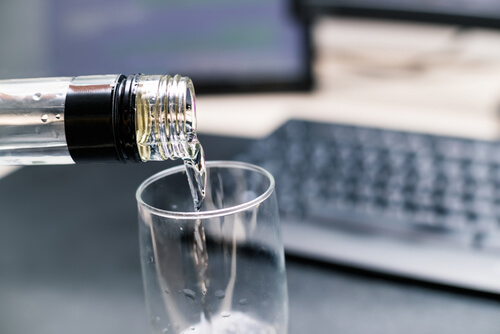 What Qualifies You as an Alcoholic?

It is important to note that functional alcoholism is not a separate disease — it still counts as alcohol use disorder (AUD). As opposed to moderate alcohol consumption, 2015-2020 Dietary Guidelines for Americans define high-risk drinking as:3

Doctors diagnose AUD when a patient’s drinking causes distress or harm. However, sometimes symptoms are mild but may still signal the start of a drinking problem. A tool developed for this purpose is the questionnaire available at the website of the National Institute of Health, which lists 11 indicators that can help individuals and their family members identify risks and possible AUD.4

What Do You Need to Know About Someone Who Is Referred to as a Functional Alcoholic?

Although sometimes symptoms of AUD are not obvious in high-functioning alcoholics, these are some symptoms that a person may be abusing alcohol:5