How Long Does Cocaine Stay in Your System?

Cocaine or its metabolites can typically stay in your system for 1 to 4 days, but may sometimes be detected for up to 2 weeks in heavy users, and detected for up to 3 months. However, several factors may influence cocaine detection time in the body, including dose, frequency of use, metabolism, age, height and weight, hydration, and genetics.1

Cocaine use and addiction can lead to serious long-term consequences to physical and mental health.2 If you or somebody you know is abusing cocaine, contact a professional to learn about available treatment programs.

How Is Cocaine Metabolized?

Cocaine half-life is about 1 hour, meaning that it takes that long for half of the drug to be eliminated from the bloodstream.3 The metabolization is performed by the liver and blood enzymes, with about 1% of the dose remaining unchanged in urine. The major metabolites that can be found in urine are benzoylecgonine and ecgonine methyl ester. The benzoylecgonine metabolite can remain detectable in urine for up to 96 hours, depending on the dose, the frequency of use, and the person’s metabolism.4

Although cocaine gets metabolized within approximately 4 hours, it can be detected during testing in:1

However, cocaine may remain in the body and be detectable on a test for longer in the case of heavy or long-term users. The main factors that can determine how long the drug remains detectable include the amount of stimulant drug taken, whether it was mixed with another substance or substances, and how often the drug is used.1 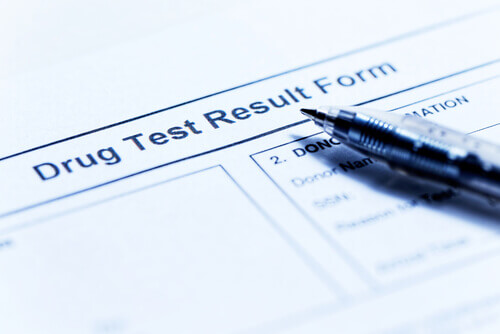 There are several different types of tests used to detect cocaine in the body. Below are the most commonly used testing methods with their estimated detection windows and times.

Cocaine hair tests tend to have the longest detection times out of all other available methods. Metabolites can usually be detected in hair follicles for as long as 3 months and even longer in some cases.6

During a cocaine saliva test, a special device is used to extract a sample from a person’s mouth and transfer it into a tube. These tests can detect metabolites for up to 48 hours after the last dose.7

Cocaine can be detected in urine tests very accurately, thanks to the fact that there is little to no cross-reactivity between other substances and the screen.7 The urine detection time for metabolites is up to 3 days after the last usage, and up to 2 weeks for heavy users.1

Urine testing is still the most commonly used method for detecting cocaine, although there are other options available.8

The speed of cocaine metabolite excretion can vary depending on a number of factors. For instance, drinking alcohol can increase the levels of the drug in your blood by 30%, as well as produce a metabolite known as cocaethylene, which might increase the cardiotoxic effects of the combination. The drug appears to be eliminated from the body slower when used with alcohol, while cocaethylene seems to be eliminated even slower than the drug itself. This can increase the detection time in a drug test.9, 10

Dehydration can also lead to cocaine staying in your system for longer. This is because water has the potential to speed up cocaine metabolite excretion.11 In addition, the drug may be excreted faster in individuals who have a higher metabolic rate and have more physical activity.1

With all of this in mind, it is important to note that drinking a lot of water or staying active is not guaranteed to help you or your loved one pass a cocaine drug test. Also, if you are pregnant, this won’t ensure that cocaine won’t enter breast milk and affect your baby.12

Stopping drug use immediately and allowing your body to metabolize it is the best way to get cocaine out of your system.1 Additionally, undergoing safe detox at a specialized facility can help you prepare for a drug test. If you or your loved one need help dealing with cocaine addiction, there are various evidence-based treatment programs that can provide you with the resources and support needed for successful recovery.

Is It Possible to Quit Cocaine Cold Turkey?

Since cocaine has a very short half-life (roughly about 1 hour), which is why withdrawal symptoms can begin as soon as 90 minutes after the last dose and last up to 7-10 days.13 However, drug cravings might persist for longer, and may even occur suddenly, long after the person stopped using. The withdrawal timeline can vary depending on several factors, including:13

Due to its short half-life, cocaine is actually one of the rare drugs that people can quit “cold turkey”, i.e. abruptly. However, doing so alone can be unsafe, especially for heavy users as their withdrawal symptoms tend to be more severe. Individuals who quit cold turkey may experience more difficulty managing intense cravings which may prevent them from achieving lasting sobriety.14

In addition, there is an increased risk of experiencing depression, mood swings, and suicidal ideation in those who attempt to quit drug use after developing addiction.14 This is because the brain adapts to the elevated dopamine activity typically associated with cocaine, which causes the reward circuit to become less sensitive to dopamine over time. The result of this is tolerance and the need to use increasingly larger doses to achieve the desired effect. Without the drug, the individual may start to feel deeply depressed or dissatisfied with their life..14

Considering these facts, safe cocaine detox at a treatment facility may be more beneficial for individuals going through withdrawal. In some cases, particularly for people who have relapsed in the past, medical cocaine detox with 24-hour supervision is recommended. Additionally, if the individual suffers from any co-occurring disorders the detoxification process may be followed by tailored inpatient treatment that can address both their drug use and mental health needs.

Get Help for Cocaine Addiction Today

Cocaine use carries the risk of developing addiction and experiencing a range of physical, psychological, financial, and social issues.2 To prevent long-term harm, it is important to find appropriate support and treatment programs sooner rather than later.

At Treatment Solutions and American Addiction Centers, we offer treatment based on extensive research and compassion. Contact us to speak confidentially with one of our admission navigators to get more information and check your insurance coverage.