How to Help Homeless Veterans with Substance Abuse Problems | TRS

What Does It Mean to Be a Homeless Veteran?

Homelessness is on the rise in the United States. A staggering 2.2% increase has been recorded between 2019 and 2020. People can find themselves homeless for a variety of reasons, and veterans are especially prone to this.

A more significant number of veterans are at risk of becoming homeless. Several factors contribute to homelessness in modern society, including the current economic climate.

What Percentage of Homeless People Are Veterans? As a result of poverty, inequality in housing, and overcrowded or inadequate housing, veteran homeless rates are twice as high as those of non-veterans. On average, veterans spend nearly six years homeless, unlike non-veterans, who spend four years homeless.1

Why Are Veterans Homeless? A homeless veteran served in the military and is currently without a home. They reside in places unsuitable for human occupation or are about to lose their current homes and have no other options but to seek refuge elsewhere. A homeless veteran is someone who spends the night in places not intended for sleeping, such as bus stops, train stations, parks, or abandoned buildings, because they do not have a place of their own to stay. A homeless shelter, a hotel subsidized by the government, or a charity might provide them with temporary housing.2 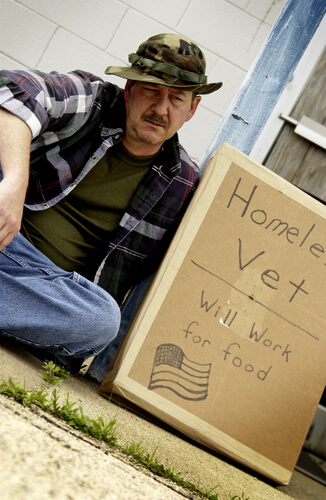 Veterans’ experiences in combat should be their most challenging event in life. Despite this, many veterans wind up homeless for eight or nine times longer than they served in the military. The average veteran spends nearly nine years homeless, whereas the average non-veteran spends approximately seven years on the street.

The longer people spend on the street, the greater their risk of disease, drug addiction, and other health problems.3

Estimates say over 40,000 veterans are homeless at any given time and take up 11% of homeless adults in the USA. This is a severe problem that the government is currently addressing. The veteran homeless rate has been declining since 2011. Veteran homelessness is primarily caused by PTSD, social isolation, unemployment, and substance abuse.4

Why Do Veterans Become Homeless?

Housing scarcity, income inequality, and lack of access to health care are among the factors contributing to homelessness. However, displaced and disadvantaged veterans also suffer from substance abuse and post-traumatic stress disorder (PTSD), which are made worse by the absence of support from family and friends. Veterans are also disadvantageous in the civilian workforce due to their transferable skills and training. The most important thing for homeless veterans is to have a clean, safe, and secure living environment and to be free of drugs and alcohol.5

There are approximately 1.5 million homeless veterans in the United States. Veterans who live beyond poverty and pay more than half of what they earn for rent are prone to becoming homeless. Households with disabled members and veterans living alone are included.6

A higher divorce rate occurs among veterans, with 1 out of 5 living alone. People in crisis situations or needing temporary assistance rely on social support. Without it, they can easily end up on the street.2

Almost half a million veterans are below the poverty level and struggle to afford the monthly rent. The majority of homeless veterans also depend on food stamps.6

It is estimated that about 45% of the 1.6 million Iraqi and Afghan veterans seeking disability compensation are still awaiting a response to their claims. It takes an average of eight months to process a disability claim.7

Why are some veterans homeless? It is difficult to answer. Homeless veterans have a higher rate of homelessness than anyone else in the United States. A variety of factors causes homelessness. It is almost impossible to find a universal solution to help everybody. Although many issues surround veteran homelessness, specific trends cannot be ignored. Veterans will likely end up on the streets due to substance abuse and mental illness.8

Substance abuse has been identified as the leading cause of homelessness. Mental health conditions, such as post-traumatic stress disorder PTSD, are strongly associated with veteran homelessness. Even though PTSD is a risk factor, it was not deemed more significant than other mental health disorders. To cope with PTSD, veterans might turn to drugs and self-medication, leading to addiction.8

There is a strong correlation between substance abuse disorders and mental illnesses, which may explain why homeless veterans often experience both. There are also other factors associated with veteran homelessness identified in other studies.9

Why Do Veterans Become Homeless as a Result of Substance Abuse?

Substance misuse is often a contributing factor to veteran homelessness. Despite the harm their compulsions may cause, veterans with substance use disorders may continue to use substances. Managing finances, work obligations, and relationships can be difficult for veterans suffering from SUD.

There is a high chance that a veteran with SUD will become homeless.11

There is also a high probability that a veteran with SUD will experience mental health issues. Both conditions increase the likelihood of homelessness. Treatment for co-occurring disorders can help veterans recover.11

Is There a Way to Help a Homeless Veteran Avoid Substance Abuse?

Their chances of recovery can significantly improve through outreach services, case management, and housing assistance. Homelessness accounted for 21% of veterans admitted to substance abuse treatment in 2011. Providing housing, employment, and community assistance is of the utmost importance.12

How To Help a Homeless Veteran? While some official programs assist struggling homeless veterans, everyone can make a difference. Among the significant problems homeless veterans face is the addiction to drugs or alcohol. Therefore, enrolling them in quality programs that offer substance addiction treatment and other forms of assistance will help them transition to a more fulfilling life. Substance abuse is often caused by loneliness, isolation, and difficulties readjusting to everyday life.6

Homeless veterans struggling with substance addiction can participate in outpatient or inpatient rehab programs. They can choose from either of these programs, depending on the severity of the addiction.14

Those who have served in the military face more difficulties when returning to civilian life after finishing their service. In the United States, approximately 3.7 million veterans are dealing with mental illness or substance abuse. Mental illness diagnoses among veterans have risen from 2008 to 2018. They need the highest level of support and care because of the additional obstacles they face during their reintegration process. Hence, many inpatient rehab programs offer treatment specific to veterans.14

MH RRTPs provide high-quality treatment and rehabilitation services in a residential setting for veterans with multiple or severe medical conditions, mental illness, addiction, or psychosocial problems. In addition to treating specific medical conditions, mental illnesses, addictive disorders, homelessness, rehabilitation, recovery, self-care, and self-improvement, the MH RRTP also addresses community integration and self-care. A lifestyle of self-care and personal responsibility is a crucial component of the residential program. The intensity of treatment, surroundings, mentality, and supervision of individuals are influenced by factors such as age, ethnicity, and culture.15

A six-week Posttraumatic Stress Disorder Residential Rehabilitation Treatment Program (PTSD-RRTP) provides highly structured treatment for those with combat-related PTSD. It is possible for veterans suffering from PTSD to recover in a supportive environment by participating in trauma-focused therapy groups. Participation is voluntary.15

Veterans who are homeless or at risk can use HUD-VASH vouchers to pay for a home in an affordable housing community. Landlords can work with the government to offer affordable housing options to veterans and their families with low income.16

Veterans’ Employment and Training Service (DOL-VETS) grants focus on providing employment opportunities through the Homeless Veterans’ Reintegration Program (HVRP). HVRP focuses on building effective service delivery systems for them and helping them find meaningful employment as two of its primary goals.17Compensated Work Therapy (CWT) is a vocational rehabilitation program. Treatment of this type should be available at every VA medical center. CWT helps homeless veterans with mental illness or physical disabilities secure better employment opportunities and keep them.18