Impact of Stigma on Veterans | Mental Health and Substance Use Disorder

There have been numerous research studies in the last few years which show that Veterans are one of the most vulnerable population groups when it comes to mental health issues. Life in the military is not easy and represents a challenge to people’s mental health and well being for numerous reasons. Chief among them is exposure to combat and life threatening situations. Living in a military base in a foreign country far from home and love ones poses a further challenge that only exacerbates the problem.1

Military life can be described as a kind of fraternity with its good sides such as camaraderie, unity and support, but it also has its downsides. Many times when living abroad during deployments, Veterans are isolated from their surroundings which makes them more exposed to peer pressure and impact of stigma. Since Veterans suffer from higher occurrence of mental health issues like depression, substance abuse, anxiety, and PTSD, it’s important to fight stigma through rising of awareness and education.2

Military culture and stigmas associated with mental health issues are major factors that explain why less than half of Veterans who suffer from mental health conditions seek treatment. In fact, according to a SAMHSA report from 2020, out of 3.1 million Veterans aged 18 or older in the US, 53.3% received no mental health treatment at all. Since Veterans suffer disproportionately from suicide ideation much more has to be done to tackle mental health issues among military Veterans.3 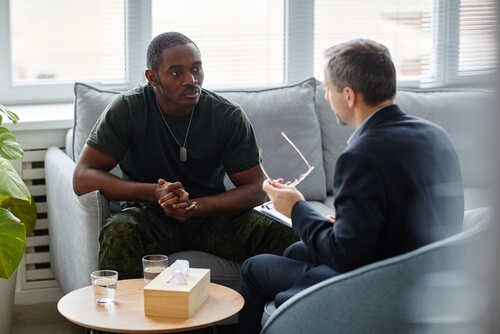 What Is Veterans Mental Health Stigma?

Stigma is a mark of shame that the society places on certain groups of people that are in some sense different from the acceptable norm. For this reason they are looked down upon by wider community which can lead to discrimination and negative stereotyping. In that sense, stigma can be accused of maintaining and reproducing certain social hierarchies and increasing inequality.4

Racism is a form of stigma that stereotypes and discriminates against people because of their race. When people are stigmatized because of their advanced age, it’s called ageism. Sometimes people can also experience ageism due to their immaturity which can be seen as a weakness in certain professions. There are many other forms of stigma that are based on gender, sexual orientation, body weight, religion, nationality, or certain physical characteristic like big ears or noses.4

Stigma impacts people’s everyday existence, influencing their decision making and relationships in many different ways. Stigmatized people might think twice before engaging in certain activities out of fear of stigmatization, for instance Veterans won’t look for help when confronted with mental health issues out of fear that they will be stigmatized by their peers or superiors.5

According to mechanism of action, stigmas can be separated in 3 groups:6, 7, 8

Where did Stigma Come From?

Mental illness stigmas exist in every society and culture and in certain cases have existed for a long time, like racism or antisemitism. But there is a growing awareness that the media plays a big part in what people believe and how they behave. This has been only heightened in our time by the proliferation of social media. Popular music, Hollywood films, video games, internet forums are some of the biggest shapers of public opinion and have great power in spreading stigma.9

One of the most common stigmas is the prejudice attached to mental health conditions. It is a result of negative depictions in films and on television, but also due to growing identification of mental health challenges with gun violence. Contrary to this, reliable research shows that people who suffer from mental health issues are a vulnerable part of society and are more likely to be the victims of violence themselves.9

What are the Effects of Stigma on Veterans?

The biggest problem with mental health stigma for Veterans is that it stops them from getting the help they need. Seeking treatment is a big step for most Veterans and stigma makes it even harder. In some cases people will try to hide their condition from the environment or if they can’t they might try to isolate themselves from others or withdraw from society altogether.5

Veterans are especially vulnerable when they get back from overseas deployments and have to start sorting their civilian lives away from military structure and everyday routine. For this reason it’s pretty common among Veterans to resort to experimenting with various substances in order to deal with the pressures of their previous military experiences and sudden mundane existence. This can easily lead them to substance abuse and addiction.1

Veterans can be prone to self-stigmatizing behavior such as:10

There are many instances of simplistic and negative depictions of US Veterans that result in people holding wrong assumptions about them even after they risked their lives to protect the American values and way of life. Some of the common myths about Veterans that people hold on to are that:10

This type of treatment can have grave consequences for Veterans in their everyday lives making them susceptible to:11

Life of military personnel includes many dangers and potential triggers that can cause mental health illnesses years after the individual has been exposed to them. In addition to the physical toll that can be very exhausting, Veterans have to deal with many psychological stressors that have the potential to negatively influence them even if they never had any mental health issues before. Some of the most distressing experiences reported by Veterans were:12

As hard as this is for veterans to take, many of them state that the hardest part is always when they come home and have to start readjusting to their everyday existence. Once the adrenaline subsides they are faced with a whole new set of challenges that they are not always best prepared to deal with. Some of the situations that Veterans cite as the biggest challenge once they get back to civilian life are:13

Stigmatization of people with mental health conditions is called sanism. Sanism is discrimination or offensive behavior towards people because of wrong held assumptions that individuals with mental illnesses are somehow inferior to “normal” people. It should be fought against just like other forms of bigotry like racism, ageism, homophobia, ableism, nationalism, sexism, and genderism. Sanism is mostly the result of irrational prejudice, lack of knowledge and relevant information, or in some cases downright malice.14

Research shows that people who know people with disorders tend to see them in a more positive light. Alcoholism and drug addiction stigmas were an exception with people having pretty much the same opinion even if they knew someone who suffers from these issues. The same study found that 60% of responders thought drug addicts have only themselves to blame, while 54% thought the same for alcoholics. Luckily only 11% thought that both of these issues couldn’t be addressed by appropriate treatment.15

SAMHSA research shows that Veterans are very susceptible to mental health stigma and that it’s having a very negative effect on their decision to seek treatment. Out of more than 3 million Veterans who reported some mental health issues, 1.3 million have substance use disorders. Almost half a million of them have both substance use disorder (SUD) and some mental illness. A staggering 85.1% of those with SUD received no treatment at all.3

Since quality treatment is available to Veterans, devastating effects of stigma have come into sharp focus in recent years. Even among Veterans with serious mental health issues, almost 27% received no treatment at all. Since Veterans are one of the most vulnerable segments of society when it comes to suicides and suicidal thoughts, the negative effects of addiction stigma on treatment of mental health issues have to be addressed.5

Effects of mental health stigma among Veterans are evident in some of the most prevalent responses they gave when asked why they didn’t look for treatment:16

What Can be Done To Overcome Mental Health Stigma?

Stigma is a psychological and personal issue that will be different in each individual case. Overcoming mental health stigma is a process and there is no way to know how long it will take. Every culture is unique and stigmas vary from one part of the country to the next. Since it’s a societal thing some people will be burdened more than others. Important thing is to remember that there is no truth to stigma and if one approach doesn’t feel right, you can always try another one. Here are some of the techniques for overcoming mental illness stigma:17

If you yourself are not stigmatized, try raising awareness and being supportive of those who are stigmatized in your environment. Always be open to learning new things and showing compassion to people who are suffering from stigmatization since your small gesture can mean a lot to them. You should talk openly about mental illness stigma but be conscious of the language that you use so as not to offend somebody even if that’s not your intention.18

If you want to learn more about stigma or just open up about your experiences of stigmatization, reach out to the Veterans Crisis Line at 1-800-273-08255. You can also check out the VA’s chat dedicated to mental health issues. If you don’t feel ready to engage in direct contact, you can still get the support you need by texting at 838255.

American Addiction Centers (AAC) is a high-class solution for treatment of substance abuse and related mental health issues. AAC partners with all the major healthcare providers in the country. It is the largest network of rehab facilities that specialize in addiction recovery offering many different types of treatment that have been proven to achieve long-term sobriety. AAC has rehab centers in every corner of the country offering you the option to choose the facility that is most suited to your situation.

AAC has a special program for Veterans and first responders called Salute to Recovery that takes into account the specific medical needs of military personnel. If you have problems with alcohol, opioids, or illegal drugs such as heroin or amphetamines, AAC offers you detox, co-occurring disorders treatment, partial hospitalization and inpatient and outpatient programs that can be adapted to your individual case.

You can easily find the rehab centers in your vicinity by using the SAMHSA’s online treatment centers locator which gives you the option to choose the type of facility you want as well as the distance you are ready to travel. You can also check out AAC’s rehab centers that offer personalized programs that tackle Veteran related conditions like anxiety, depression, and PTSD. There are 2 AAC facilities that partner with the VA as members of community care providers: