If you are considering seeking treatment for yourself or a loved one, remember that you are not alone. The number of individuals suffering from substance use disorders, including heroin addiction, is staggering. Let us take a look at some statistics on heroin use and the available treatment options

What Are the Trends in Heroin Use?

Compared to other substance abuse disorders, heroin use is rather low in the general population.1 Nevertheless, official U.S. heroin treatment statistics shows that the number of people who seek treatment for heroin addiction is higher than for any other illicit drug, except marijuana. Despite the fact that the number of active heroin users is relatively small, heroin has a higher rate for treatment admissions to publicly funded facilities in the U.S.2 These numbers emphasize the importance of adequate heroin addiction treatment for helping these individuals restore a fulfilling, healthy lifestyle.

The heroin treatment statistics offered by the National Institute on Drug Abuse show that the number of new heroin users has been steadily increasing since 2007. There are two possible reasons for this:1 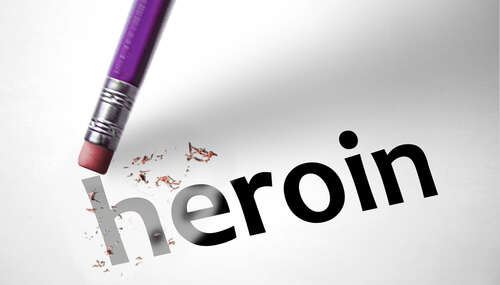 A 2019 survey of the admissions to the Department of Mental Health and Addiction Services (DMHAS) conducted in Connecticut showed that heroin was the most frequently reported primary drug. Of the total number of 94,941 admissions to substance abuse programs and mental health programs operated by DMHAS, heroin accounted for 36% of admissions, while alcohol was the next most frequently reported primary drug reported in 32% of admissions.3

Addiction is a chronic disease and relapse rates for addiction are similar to the ones for other chronic medical illnesses such as asthma or hypertension. If patients do not follow their treatment plan, many of them may relapse. As expressed in figures, relapse rates for addiction diseases are 40-60%. Relapse does not necessarily mean that treatment has failed, but it does mean that the person should go back to treatment or modify the kind of treatment for their condition.4

Research found that relapse rates for opiate addictions are similar to the relapse rates of other kinds of addictions.5 Heroin treatment statistics indicates that there seems to be a period when relapse is likely to occur, which is within the first week after treatment program discharge. This means that it is important to ensure aftercare in order to prevent relapse.

The predictors of earlier relapse seem to be:5

The same study also found that as many as 92% of those who relapsed re-entered treatment. This means that once people access treatment services, they are more likely to reach out for help again.5

Medications are often used in the detoxification stage, when a person is likely to experience unpleasant withdrawal symptoms when they quit using drugs. These symptoms can be quite severe and involve nausea, pain, or diarrhea, and methadone therapy helps diminish them.

Behavioral therapies that may increase chances of recovery from heroin addiction are the following:6

When it comes to the cost-effectiveness of treatment, heroin treatment statistics show that compared to drug users with little or no addiction treatment, those who went through treatment that consisted of buprenorphine plus addiction counseling had significantly lower total health costs.7

A study that looked into the relation of treatment length and relapse time found that the users who completed an entire six-week inpatient treatment program also had a significantly delayed relapse. This shows that staying in treatment long enough is critical.5

A study that explored the success rates of medication-assisted treatment found that patients who used medication for at least 1-2 years have the greatest rates of long-term success.9

Relation Between Heroin and Prescription Opioids

In some cases, heroin is used with other drugs or as a replacement for other drugs: