Mixing Alcohol With Other Drugs: Side Effects & Dangers

Additionally, there is a link between alcohol and drug abuse. Namely, people struggling with alcohol use disorders are 18 times more likely to abuse prescription drugs than people who do not drink.2 According to the official data of the National Institute on Alcohol Abuse and Alcoholism, 1.1% of the adult US population meet the criteria for a substance use disorder that involves both alcohol and drugs, with people aged 18-24 being most vulnerable.3

What’s more, mixing prescription drugs and alcohol causes a growing percentage of opioid-related deaths and emergency room visits.4 In suicides that involve more than one substance, about one-third involve a combination of prescription drugs and alcohol. Similarly, mixing alcohol with illicit narcotics can have adverse and even fatal effects: high alcohol concentration levels in the blood in heroin users raises the chance of a fatal overdose by 22 times or more.5 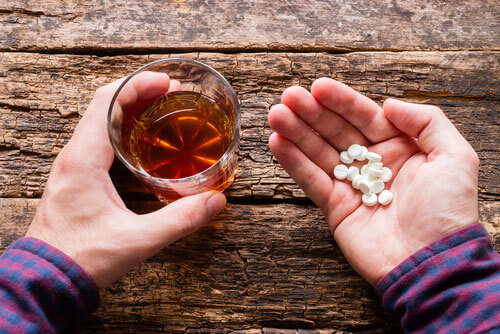 Most Commonly Mixed Substances With Alcohol

Mixing alcohol with antidepressants can worsen the feelings of depression and hopelessness, which is the opposite effect of the intended purpose of these medications. Depending on the chemical mechanisms that a particular antidepressant drug uses, the adverse effects of using them with a particular type of alcoholic drink may differ but can include:6

Generally speaking, drinking alcohol while taking medications from this category can make the person feel drowsy and dizzy. Moreover, antidepressants can enhance the effects of alcohol, so the person may get intoxicated with lower quantities of alcohol than it would be the case under normal circumstances.6

Alcohol and benzos both have sedative effects. The combination of other depressants and alcohol can cause serious impairment of the central nervous system. For example, mixing Xanax with alcohol or mixing Ativan with alcohol can overly sedate the person, decrease their motor skills, and cause memory problems.5 What is especially dangerous is that mixing alcohol with antidepressants increases the risk of overdose.6

This category of medications is very large and includes analgesics such as aspirin, but also opioid painkillers such as morphine.

Acetaminophen and aspirin interfere with the metabolism of alcohol and vice versa, which results in potentially toxic painkillers and alcohol side effects.6

Consuming alcohol with non-steroidal anti-inflammatory drugs such as ibuprofen or diclofenac can inhibit the process of blood clotting and cause prolonged bleeding. In elderly people, this is a risk factor for intestinal bleeding and ulcers.6

Mixing alcohol with prescription opioids enhances the sedating effects of these drugs. This sedation can be potentially lethal as it can slow down the breathing and reduce the cough reflex so much that it puts the person at risk of choking.6 It was found that the elderly are at a higher risk of these life-threatening effects.4

Cocaine mixed with alcohol produces greater euphoria than using cocaine only, which is why cocaine users often combine the two. Some of the physical effects of this combination is an increased heart rate and higher blood concentration of the drug. The psychological effects may cause the person to take larger amounts of these substances, which increases the risk of toxicity.5

Alcohol and heroin in combination have a powerful sedating effect on the central nervous system. The danger of mixing narcotics with alcohol is that this combination may slow down or even stop breathing and the cough reflex, so the person may suffocate and die.7

Alcohol and marijuana are commonly consumed at the same time. When smoking marijuana while drinking, the person is likely to drink more, which increases the risk of alcohol poisoning. One of the effects of marijuana is that it makes it more difficult to vomit and eliminate the toxic substances from the stomach. The unwanted psychological effects of this combination may include paranoia, panic attacks, and anxiety.8

Alcohol and molly (ecstasy) taken in combination prolong the high. However, as a depressant, alcohol masks the stimulant effects of ecstasy, because of which a person may not see how actually intoxicated they are. In addition, this combination increases the risk of dehydration and puts a lot more strain on the kidneys.9

Some short-term effects of mixing drugs and alcohol are prolonging the high induced by the drug9 (e.g. ecstasy) or achieving stronger sedation6 (e.g. prescription opioids), which is why some people intentionally take alcohol and another substance in combination. However, there are also many unwanted short-term effects of this mixing, which may include:1,6

Mixing alcohol and drugs can have severe consequences in the long run. These can include:1,6

Risk of Overdose by Mixing Alcohol

Overdose may happen because alcohol and drugs can enhance each other’s effect. In the case of opioid medications, the effects of mixing drugs and alcohol can slow down the breathing so much that the consequences can be lethal.6 In addition, the person who is drunk may not administer the drug properly because they are unaware of how intoxicated they actually are. This may result in taking dangerously larger doses.9,10

Mixing Alcohol and Drugs During Pregnancy

A study that examined the occurrence of substance abuse in pregnancy found that among pregnant women who reported current drinking as many as 38.2% reported use of at least one more substance, mostly tobacco, marijuana, and opioids.11

Research has shown that exposure to alcohol and other substances in pregnancy can worsen birth outcomes. These adverse effects include:11

In some cases, planned professional intervention of the people from a user’s immediate surroundings may be enough to stop them from abusing drugs and alcohol and putting themselves at serious risks. However, some people are struggling with more severe forms of addiction and their long-term recovery is not possible without professional help. This may require intensive inpatient services, especially during the process of detoxification from alcohol. Some patients may need to undergo medication-assisted therapy as pharmacotherapy has proved to be helpful in mitigating unpleasant alcohol withdrawal symptoms and maintaining abstinence.12

When searching for help, it is important to look for a treatment facility equipped to help treatment seekers with co-occurring alcohol and drug abuse. American Addiction Centers offers such programs in many locations across the country. As some groups of patients are especially vulnerable, some of the treatment centers offer programs designed to meet the needs of women struggling with alcohol abuse or pregnant patients who need special treatment and care.Information about treatment options and the process of admission into treatment is available through a 24/7 toll-free helpline for alcohol abuse and other substances and through American Addiction Center’s website. It is even possible to immediately check insurance coverage and payment options either by phone or through an online form.